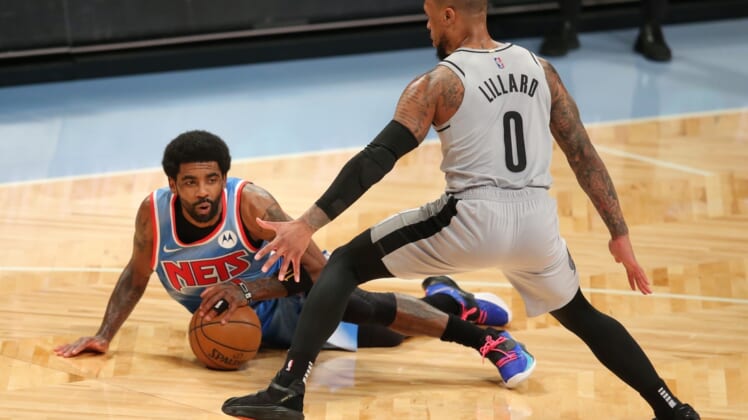 Jusuf Nurkic contributed 23 points and 11 rebounds as Portland improved to 3-0 on a six-game road trip. Lillard was 8 of 13 from 3-point range for the Trail Blazers (35-28), who have notched the three victories by an average of 20.3 points.

Kyrie Irving scored 28 points for the Nets after sitting out Thursday’s 130-113 victory over the Indiana Pacers due to a groin injury.

Brooklyn star Kevin Durant was held on the second end of a back-to-back despite matching his season high of 42 points versus the Pacers. The team said it was for injury management of the left hamstring ailment that forced him to miss 23 straight games earlier this season.

Norman Powell added 19 points, Carmelo Anthony scored 15 and CJ McCollum and Anfernee Simons had 10 points apiece as Portland moved within a half-game of the sixth place Dallas Mavericks in the Western Conference.

Jeff Green scored 16 points and Mike James added 15 for the Nets (43-21), who saw their Eastern Conference lead slip to a half-game over the Philadelphia 76ers. Joe Harris added 12 points and Blake Griffin scored 11 for Brooklyn, which shot 42.1 percent from the field and 13 of 41 from 3-point range.

The Trail Blazers connected on 51.6 percent of their shots. They hit 16 of 36 from behind the arc.

Lillard scored five points and Powell added four during a 9-0 run as Portland took an 85-75 lead with 2:18 remaining in the third quarter.

Lillard later made two 3-pointers from the Nets’ logo — measured at 33 and 34 feet — in a 54-second span as the Trail Blazers increased their lead to 15. James scored the final basket of the quarter to cut Brooklyn’s deficit to 94-81.

The Nets crept within 99-91 on DeAndre Jordan’s dunk with 9:18 remaining before Portland regained control with a 13-4 spurt. Enes Kanter capped the burst on the alley-oop from Lillard to make it a 17-point margin with 5:47 left.