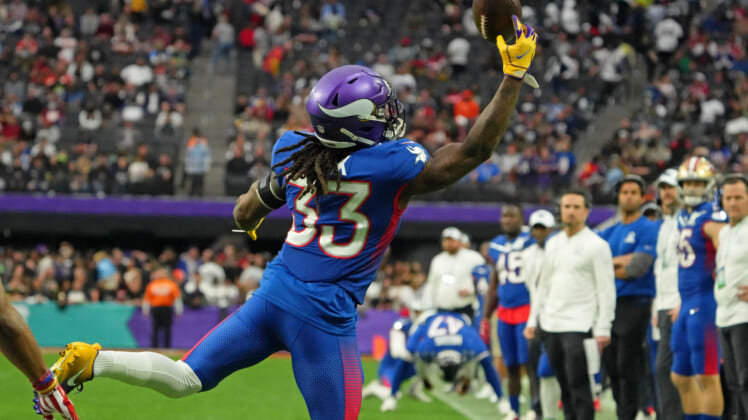 From the very first time Dalvin Cook took the field with the Minnesota Vikings after being the 41st pick in the 2017 NFL Draft, the former Florida State running back made his presence felt.

Cook sprinted out to a 127-yard effort in his first game as a pro at 22 years old. Once one of the top backs in college, Cook was ready to show the world what he could do.

Five years later and Cook has established himself as one of the best running backs in football. Now that the Vikings have changed general managers and brought in a new offensive-minded head coach with Kevin O’Connell, Cook could be in for his best season yet from an all-around production standpoint. Here’s why.

It’s become obvious that Cook is one of the best players in all of football with the rock in his hands. It doesn’t matter how he gets it, whether it’s a handoff, a screen set up for him, or a checkdown pass, get this elusive man the ball and watch him work.

He typically makes the first defender miss no matter what, so getting him in more open space just makes sense.

That might be exactly what O’Connell plans to do with Cook now that he has full control of an offense after working with the Los Angeles Rams from 2020 to 2021.

The Rams didn’t have a top-flight running back when O’Connell was there, his tenure came after Todd Gurley’s departure.

With that said, the Rams still managed to get decent production out of their backfield, often splitting Sony Michel or Cam Akers out wide, and employing them as wide receivers, or wide backs if Deebo Samuel’s verbiage becomes a trend.

Yet, as mentioned, the Rams didn’t have anyone in their stable who had Cook’s talent, either from a running or catching perspective.

According to The Athletic’s Chad Graff, the Vikings had Cook routinely split out as a receiver during their first OTA practice, but the talented back didn’t want to give any hints away about possible future plans.

In his time with the Vikes, Cook has shown strong hands and incredible concentration, routinely taking halfback sweeps making fans hold their breath in fear of dropping the ball. He rarely does.

Sure we’ve seen some frequent shoulder injuries which have led to a few extra fumbles over the years, but Cook’s hands have proven fairly reliable, despite what his drop rate indicates (still better than Alvin Kamara’s rate).

The Rams lined up Michel out wide as a receiver on 13.7% off his pass snaps, according to Pro Football Focus. In 2021 when Akers was the lead back, he lined up out wide on 19.2% of his pass snaps.

While these numbers may seem large, they only equated to 43 and 25 snaps for each player over the course of the year, it’s not like it was a drastic change, but it could help open up an offense that sometimes finds itself stuck between throwing to two options with Justin Jefferson and Adam Thielen working to get open.

Having Cook also out wide, confusing the defenders while providing Kirk Cousins with another lethal safety valve could be downright dangerous. Anything that can be done to get Cook the ball in his hands while reducing the overall beating he takes should be seen as advantageous.

The Vikings might be preparing to do just that in 2022. With Jefferson, Thielen, Cook, and maybe Irv Smith Jr. or KJ Osborn all running routes, defenders will have their hands full trying to keep up with the boatload of talent.

The Vikings actually have a bit of a problem on their hands. But it’s a good problem to have.

Dalvin Cook recently spoke of the deeply talented running back depth chart, but the sixth-year pro is fully on-board with the plans going forward, understanding it’s a fragile position.

Dalvin Cook via Chris Tomasson of The Pioneer-Press

He also had a few nice things to say about third-string running back and Pro Bowl kick returner Kene Nwangwu.

“He doesn’t have a ceiling. He’s got it all. We see it on special teams. The thing I haven’t seen is him run the ball more consistently and get the ball more. I think that’s going to happen coming up. He’s special with the ball in his hands, and I want to see him make more plays.”

Like Cook, Nwangwu is clearly a talented back once he gets the ball in his hands. His 4.32 second 40-yard dash plays great on special teams, but with O’Connell at the helm, the second-year pro figures to receive some additional pass-catching opportunities as well.

The Vikings even drafted Ty Chandler in the fifth round of the 2022 NFL Draft, a clear sign they place a high importance in the position, yet understand the value of having multiple backs due to the increased likelihood of one going down with an injury.

With Alexander Mattison returning as Cook’s top backup, maybe we see him take more of the goal-line opportunities, with the idea of protecting from taking the additional hits commonly seen at the line of scrimmage. That just might help keep Cook more fresh and healthier down the stretch as they have their sights on a playoff run this postseason.

With a plan to keep Cook in better health, while getting him extra pass-catching opportunities, you never know, we just might see the best version of the three-time Pro Bowl savant yet this upcoming season. And he’ll do it all with a new number on his back.

Related: Dalvin Cook confirms plans to change jersey number from No. 33 to No. 4 this season