Dallas Stars bounce back with dominant win over Blackhawks 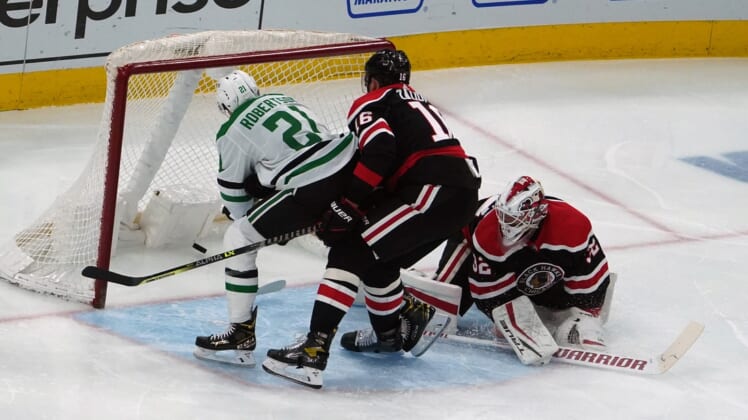 Roope Hintz had a goal and three assists for the visiting Dallas Stars in a 5-1 win against the Chicago Blackhawks on Thursday night.

Dominik Kubalik scored, and Kevin Lankinen made 29 saves for Chicago, which dropped four points back of the fourth-place Nashville Predators with 15 games left for each team.

The Stars scored three unanswered goals in the second period to take a 4-1 lead.

Hintz centered a pass to Robertson, who was in close on Lankinen. Robertson stopped the puck and Lankinen continued to slide to his left, allowing Robertson to tuck the puck in the net for a 2-1 lead at 1:13.

Heiskanen scored on a wrist shot from the high slot while on the power play to extend the lead to 3-1 at 14:02.

Comeau, who came in with one goal in 32 games this season, got loose on a breakaway and scored his first goal of the game at 15:47 to make it 4-1.

Comeau scored again off a feed from Hintz following a turnover for a 5-1 lead 50 seconds into the third period.

Ryan Carpenter was in the penalty box for slashing Hintz when Hintz gave the Stars a 1-0 lead at 9:19 of the first period.

Lankinen made a save on Jamie Benn off a cross pass from in close, but lost his stick on the save and Hintz scored up high on the rebound for his 12th goal of the season and fifth on the power play.

Vinnie Hinostroza won the puck in the corner and quickly centered a pass to Kubalik, who had crept to the front of the crease. He redirected the puck in the net for his 14th goal of the season.

Chicago won the opener of the two-game set 4-2 on Tuesday.