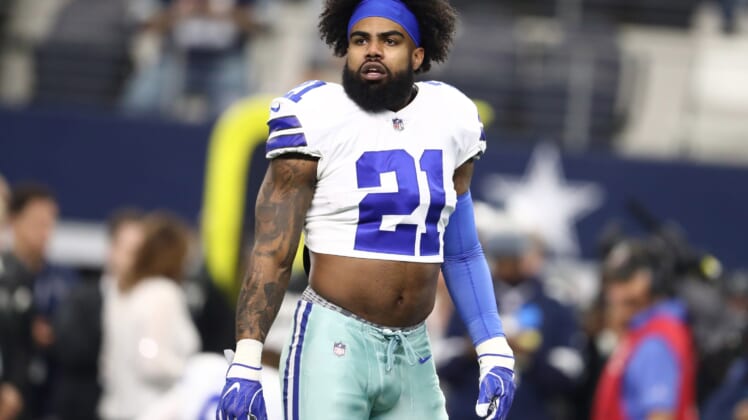 On Monday, news broke that Ezekiel Elliott was one of the players from the Dallas Cowboys and Houston Texans who tested positive for COVID-19.

He’s not happy about the leak.

In a series of tweets, Elliott made it clear that he is frustrated his positive coronavirus test was leaked to the public.

HIPAA stands for Health Insurance Portability and Accountability Act. It protects the privacy of patients, among other things.

Now, after Elliott tweeted that message, he was inundated with responses that his agent was the person who confirmed his positive COVID-19 test. That prompted the Cowboys star to further clarify why he is upset.

So clearly, Elliott and his agent were playing catch-up on this.

NFL and COVID-19 are just getting started

Elliott isn’t the first NFL player to have a confirmed positive COVID-19 test come out. Others, including Von Miller of the Denver Broncos, have chosen to let their positive results come to light. Elliott, obviously, did not get that chance and he’s frustrated about his privacy being infringed upon.

However, this outcome is probably something other players will need to get used to. The NFL is getting prepared to bring all its players back into the fold next month for training camp. While the league is doing everything it can to set things up as safely as possible, the fact remains that COVID-19 is going to have a lot to say about the way this coming season plays out.

Players and coaches will test positive. Their names will be shared, intentionally or not. It’s going to happen because that’s how this industry works — like it or not.

The nation is currently experiencing a spike in positive cases in 20 out of 50 states. COVID-19 and the NFL are just getting started, and it remains to be seen if the league will truly be able to contain this virus so that games can be played.