Dak Prescott on Ezekiel Elliott: ‘I miss him a lot’ 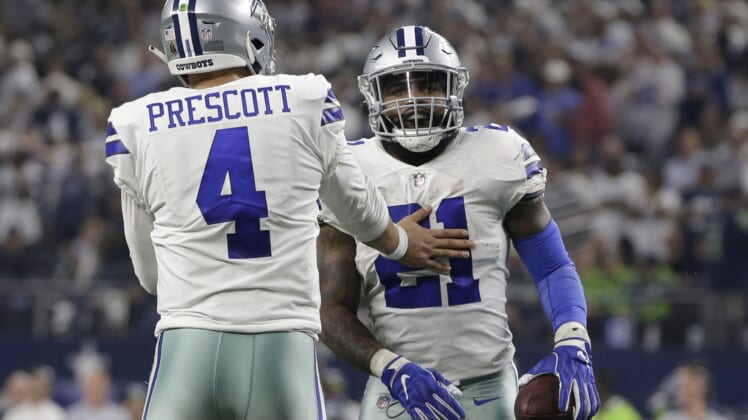 There’s a darn good chance that quarterback Dak Prescott and the Dallas Cowboys will be without holdout running back Ezekiel Elliott come Week 1.

That’s not necessarily good news for Mr. Prescott. He relies a great deal on his Pro Bowl ball carrier.

In talking about Elliott’s holdout on Saturday, Prescott did not hold back. He knows full well that Elliott being absent from training camp hurts him in a big way. He also misses the holdout.

For good reason. During his three-year career, Prescott boasts a 4-4 record with a 76.3 rating without Elliott. In games the two have played with one another, Prescott is 28-12 and owns a 100.0 quarterback rating.

It does not seem like an end is in sight to Elliott’s holdout. The Cowboys’ brass has indicated that it will not reset the market at running back. Meanwhile, owner Jerry Jones continues to take an offensive stance.

It goes without saying that Dallas needs Elliott back in the fold here soon if it wants to be considered serious Super Bowl contenders. Prescott knows that.