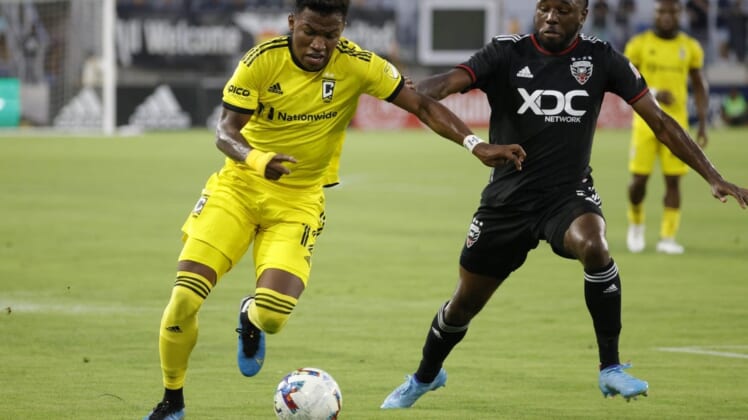 Ola Kamara scored in the 92nd minute as D.C. United rallied for a 2-2 tie against the visiting Columbus Crew on Wednesday.

Despite the dropped points, the Crew (6-5-8, 26 points) ran their unbeaten streak to three wins and four ties.

Cucho Hernandez scored two goals, the second in the 81st minute to give the Crew a 2-1 lead.

Kamara got the equalizer for D.C. (5-10-3, 18 points) off a scramble following a corner kick as he was able to poke the ball in from close range.

Hernandez and Lucas Zelarayan entered the match in the 46th minute for the Crew and combined for a 1-0 lead in the 62nd minute.

Taxiarchis Fountas, who missed a penalty kick in the 73rd minute that would have given D.C. the tie, redeemed himself with his 10th goal in 12 games this season.

But Hernandez, who debuted for the Crew on Saturday with the winning goal against Chicago after transferring from English club Watford, scored with a diving header at the right post from the service by Zelarayan.

Hernandez, whose $10 million transfer fee was a Crew record, has three goals in 73 minutes over his two matches.

The first goal from D.C. came from the top of the box from the on the left side with a strike to the far post.

Fountas had an opportunity to tie with his PK but put it left off the frame.

D.C. was coming off a 7-0 defeat to the Philadelphia Union on Friday, equaling the largest margin for a loss in Major League Soccer history.

On Tuesday, former Premier League and English national team star Wayne Rooney was named coach but he was not on the bench. Interim coach Chad Ashton, who replaced Hernan Losada six games into the season, coached D.C.

Without Hernandez and Zelarayan, the Crew was dominated in the first half by D.C., which had a 9-1 shot advantage but couldn’t finish several prime chances.