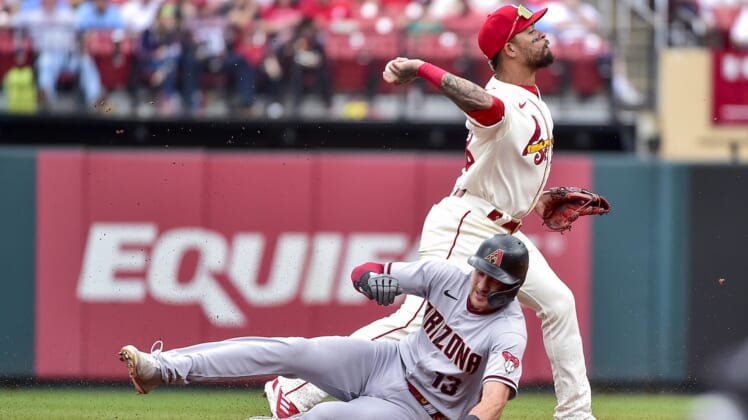 Ketel Marte and Nick Ahmed hit home runs in the eighth inning after the Arizona Diamondbacks had only two hits previously in the game in a 2-0 win Saturday over the host St. Louis Cardinals.

The home run by Marte was his first of the season and also the first allowed this season by St. Louis right-hander Miles Mikolas, who was engaged in a pitcher’s duel with Arizona right-hander Merrill Kelly through seven innings.

Marte’s home run to right field led off the eighth inning, and one out later, Nick Ahmed cleared the left-field wall to put Arizona ahead 2-0.

Marte was in a 1-for-28 slump before the home run.

Mikolas (1-1) was then relieved by Genesis Cabrera after pitching 7 1/3 innings and allowing four hits with seven strikeouts with no walks.

Ian Kennedy pitched a hitless ninth inning for his first save of the season.

St. Louis played without Nolan Arenado, who is batting .375 and entered Saturday leading the National League in slugging percentage (.681) and OPS (1.125). He served a one-game suspension for inciting a bench-clearing brawl with the New York Mets on Wednesday. Arenado’s suspension was reduced from two games to one after an appeal.

The duel between Kelly and Mikolas included each allowing only one hit through the fifth inning.

Harrison Bader had St. Louis’ hit in the second inning with a two-out single and he stole second before Dylan Carlson grounded out.

Ahmed, who went 2-for-3 to boost his batting average to .368, reached on an infield single to start the third inning. He was quickly erased on a double play hit by the next batter, Sergio Alcantara.

Pavin Smith hit a single with two outs in the top of the sixth inning and moved to second on a stolen base before Mikolas struck out Jordan Luplow.

The Cardinals threatened in the bottom of the sixth after Kelly hit Edmundo Sosa with a pitch with one out. After Sosa stole second base, he moved to third base on a flyout to center by Tommy Edman.

Paul Goldschmidt then hit a slow roller to Ahmed at shortstop. With Sosa running toward home plate, Ahmed charged the ball, bare-handed it and threw to first base a split second before Goldschmidt touched the base for the last out of the frame.