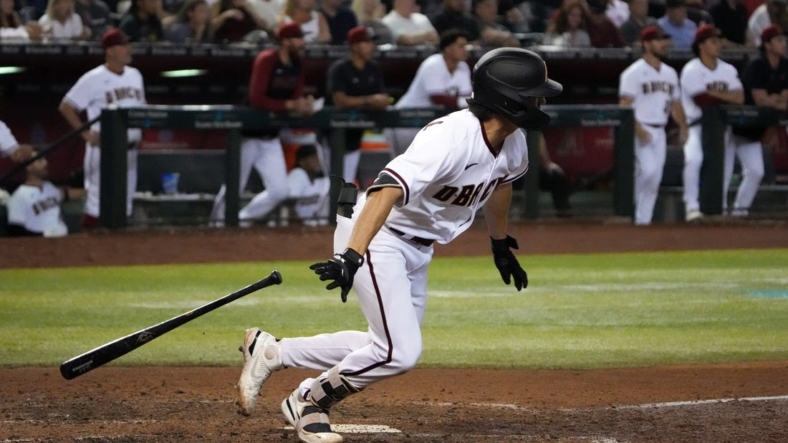 Carson Kelly drove in four runs and the Arizona Diamondbacks overcame a seven-run deficit to post a 13-7 victory over the Philadelphia Phillies on Monday night at Phoenix.

Corbin Carroll delivered a tiebreaking double in his major league debut for Arizona, which scored six runs in back-to-back innings for the first time in franchise history.

It marks the second time this season Philadelphia led 7-0 in the fourth inning and lost the game. The Phillies fell 8-7 to the Mets on May 5 after blowing a similar lead, with New York scoring seven runs in the ninth inning.

Stone Garrett clubbed his second big-league homer for the Diamondbacks, who matched a season best with their fourth straight victory. It is the second time this season that Arizona scored 13 runs, its season high — both times against the Phillies.

Kyle Schwarber hit a three-run homer and knocked in four runs for Philadelphia. He leads the National League with 36 homers.

The loss was just the 10th in the past 32 games for the Phillies, but also the club’s second in a row.

Philadelphia has lost six straight games at Phoenix since a win on Aug. 5, 2019.

Arizona registered its first six-run inning in the fourth. Emmanuel Rivera drove in one with a double off Ranger Suarez, and Garrett knocked in another with a single.

In the fifth, Jake McCarthy was hit by a pitch from Cristopher Sanchez (2-2) with the bases loaded to tie the score. Carroll followed with a two-run double for his first major league hit to give Arizona a 9-7 lead.

Kelly added a run-scoring single off Andrew Bellatti, who delivered bases-loaded walks to Ketel Marte and Christian Walker later in the inning.

Garrett homered just inside the left field foul pole to conclude the scoring in the eighth.

Philadelphia held a 3-0 lead after Schwarber’s RBI single in the second. In the fourth, he clobbered Madison Bumgarner’s 1-0 cutter for a 432-foot, three-run blast to make it 7-0.

Bumgarner was shellacked for seven runs and 11 hits over 3 2/3 innings. He struck out two and walked none.