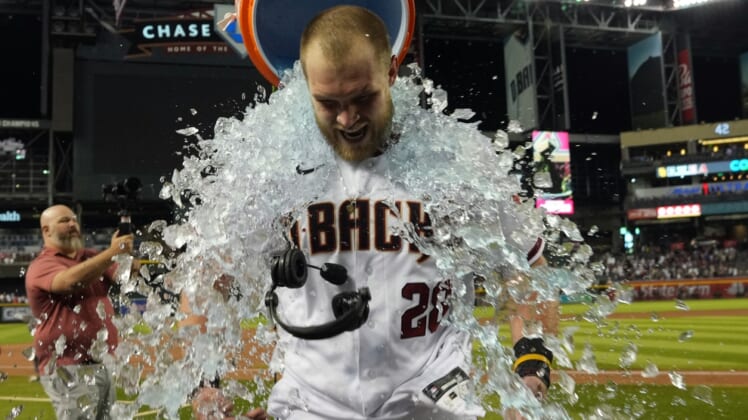 Left-handed-hitting Seth Beer smacked a three-run homer with no outs in the bottom of the ninth inning to give the Arizona Diamondbacks a dramatic 4-2 victory over the San Diego Padres on Thursday night in Phoenix.

The Diamondbacks had just two hits entering the inning and only needed one during the four-run uprising. Two walks, a hit by pitch and a run-scoring wild pitch preceded Beer’s second career homer, a 386-foot blast off Padres right-hander Craig Stammen (0-1).

San Diego right-hander Robert Suarez made his major league debut to start the ninth and walked Christian Walker and Pavin Smith, then plunked Carson Kelly with a pitch before being lifted.

Stammen’s first pitch to Beer was wild, allowing Walker to score from third. His next pitch went soaring over the right-field wall.

Left-hander Joe Mantiply (1-0) pitched a scoreless top of the ninth.

Arizona did very little on offense all night, finishing with just the three hits.

Padres right-hander Yu Darvish pitched six hitless innings before being pulled after 92 pitches. He walked four and struck out three.

Left-hander Tim Hill replaced Darvish and Smith quickly broke up the no-hitter with a bloop single into left field. Hill also allowed a single to Beer later in the inning before being removed.

Pierce Johnson struck out three in 1 1/3 innings prior to the ninth-inning meltdown.

Luke Voit drew a bases-loaded walk and Austin Nola contributed a run-scoring single for the Padres, who had just four hits.

Diamondbacks left-hander Madison Bumgarner lasted just three innings while struggling with his control. He gave up one run, one hit, four walks and struck out two.

The Padres scored their first run in the third inning when Bumgarner issued all four of his walks.

Ha-Seong Kim drew a leadoff bases on balls, but Bumgarner retired the next two hitters. Then he delivered free passes to Manny Machado and Jake Cronenworth to load the bases. Bumgarner got ahead with two strikes against Voit before tossing four straight balls to give San Diego the run.

The Padres added on in the fourth when Jurickson Profar, Trent Grisham and Nola all singled off right-hander Luke Weaver. Nola’s two-out ground single into right field drove in Kim — who forced out Profar — to make it 2-0.