Curt Schilling Announces His Cancer is in Remission

According to Yahoo Sports, Curt Schilling announced he had cancer back in February. And while he never spoke about which type of cancer he had, he has been posting pictures of the treatments that he has been undergoing. A type of “update” to give fans of the three-time World Series champion. 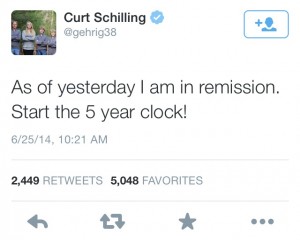 Schilling, whose Twitter handle is named after his son Gehrig, accumulated a 216-146 record and a 3.56 ERA in a stellar 20-year Hall of Fame worthy career.

Oh, he also did this…