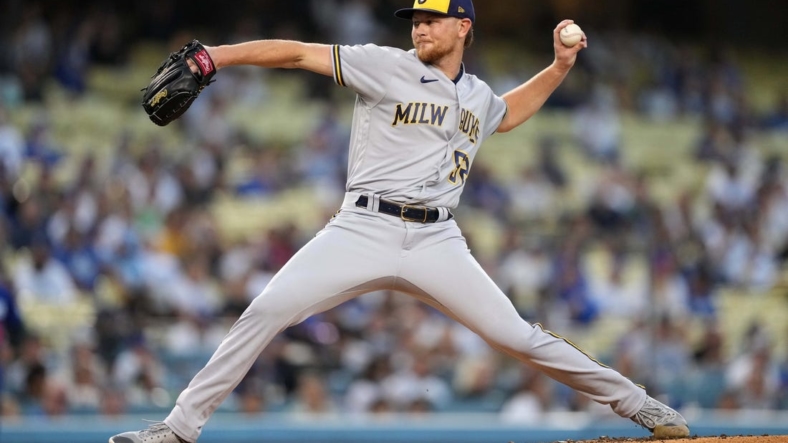 Considering how well Eric Lauer has pitched of late — and against the Chicago Cubs all season — the Milwaukee Brewers appear in good position to win a much-needed series.

The Brewers can do so by winning back-to-back games at home for the first time in more than two weeks on Sunday against the Cubs.

Lauer (9-5, 3.44 ERA) has allowed more than two earned runs just twice in his last nine starts, and is 3-2 with a 2.10 ERA in his last five. The left-hander allowed five hits and two walks over five innings of Milwaukee’s 4-0 victory against the Los Angeles Dodgers Monday.

He’s 1-0 with a 2.12 ERA in three starts against the Cubs this season, and allowed only solo homers to Yan Gomes, Nelson Velazquez and five other hits while striking out 20 with three walks over 13 innings in two home 2022 starts during this season series.

Milwaukee is 8-10 against the Cubs, and will lose the season series to a club that’s 17 games under .500. However, after the Brewers evened this set with Saturday’s 7-0 victory, they have a chance to win their first home series of at least three games since taking three of four from Colorado on July 22-25.

“We’re just trying to do our best,” Milwaukee pitcher Freddy Peralta said. “I know the guys are doing their best (to) get out there and win games.

“But, you know, sometimes it’s hard. This game is hard.”

Milwaukee star Christian Yelich clubbed a three-run homer for one of his four hits Saturday. He’s batting .357 (15-for-42) with two homers and seven RBIs in his last 11 games.

Yelich, though, is 1-for-5 versus scheduled Chicago starter Adrian Sampson (1-4, 4.04 ERA), who looks to rebound after he allowed five runs and eight hits, including two homers, over just 3 1/3 innings of Tuesday’s 13-3 home loss to the St. Louis Cardinals. It was the shortest start of 2022 for Sampson, who also yielded his most earned runs of the season.

However, the right-hander was solid during the Cubs’ 2-1 victory at Milwaukee on July 6. Lasting 5 2/3 innings, Sampson gave up just a fifth-inning homer to Keston Hiura, three other hits and fanned five without a walk.

Chicago’s Seiya Suzuki is 0-for-5 against Lauer, but after recording two doubles on Saturday, he’s batting .318 (14-for-44) in his last 13 games. Suzuki has also batted .333 with four homers and 13 RBIs in 14 games versus Milwaukee this season.

Despite their overall record, relying on a host of young players and falling Saturday, the Cubs are 21-15 since July 17, and have a chance to win a third straight road series.

“We’ll continue to play this thing out, see how we finish.”

The Cubs announced Saturday that slugger Patrick Wisdom was placed on the 10-day disabled list with a finger injury.