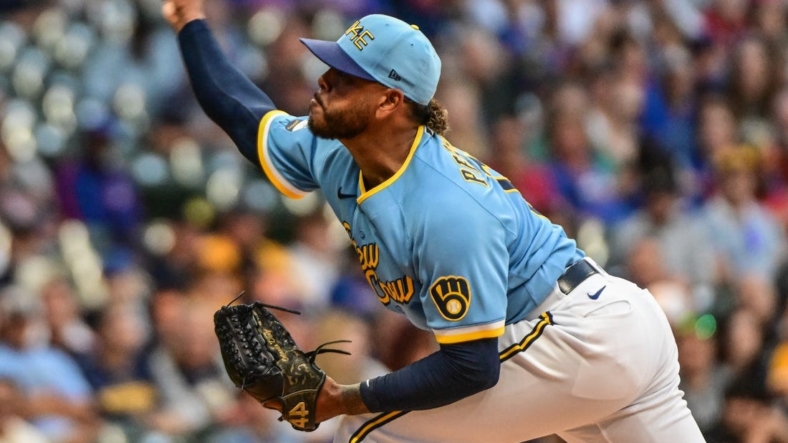 Ian Happ belted his second two-run homer of the game in the 10th inning as the visiting Chicago Cubs made the most of their only two hits to earn a 4-3 victory over the Milwaukee Brewers on Friday.

Happ launched a two-run homer in the seventh inning to stake the Cubs to a 2-1 lead.

The advantage stood up until Rowdy Tellez belted his team-leading 27th homer to lead off the ninth, but Happ answered in the 10th by depositing a 1-0 changeup from Devin Williams (4-3) over the wall in right field to give Chicago a 4-2 lead.

Happ, who went deep for the 14th and 15th times this season, improved to 5-for-8 with two doubles, two homers, six RBIs and three runs over his past two games. He was mired in a 2-for-21 stretch with seven strikeouts in his previous six games.

While Happ went 2-for-4 on Friday, the rest of the Cubs went 0-for-28 with eight strikeouts.

Sean Newcomb (2-0) picked up the win after retiring both batters he faced to end the ninth inning. Manuel Rodriguez allowed Hunter Renfroe’s one-out RBI single in the 10th before securing his first save of the season after inducing a game-ending double play from Jace Peterson.

Milwaukee starter Freddy Peralta did not allow a hit while striking out five and walking one over six scoreless innings. He exited after 82 pitches, with Matt Bush taking over to begin the seventh.

Chicago began its rally as Nick Madrigal reached base on Luis Urias’ error and advanced to second on a groundout. Happ deposited a 3-2 fastball from Bush over the wall in right field.

Cubs reliever Brandon Hughes struck out three batters in the eighth inning before Tellez opened the ninth by sending Hughes’ 1-2 slider over the wall in right-center field.

Tyrone Taylor homered to lead off the fifth inning for the Brewers, who have lost three in a row. He sent a 1-2 slider from Chicago starter Justin Steele over the wall in left field. The homer was Taylor’s 13th of the season and first since Aug. 5.