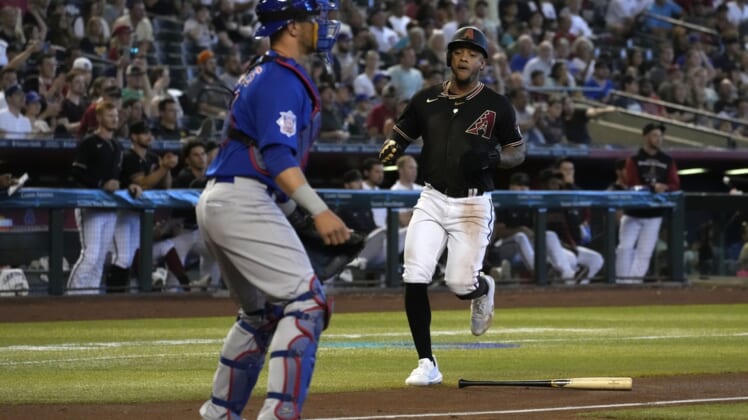 Yan Gomes drove in the go-ahead run in the top of the ninth and also homered as the visiting Chicago Cubs rallied for a 4-2 victory over the Arizona Diamondbacks on Saturday night in Phoenix.

It was just the third win in the last 10 games for Chicago, which had managed just three base runners before scoring three times in the ninth against Diamondbacks closer Mark Melancon (0-5).

Melancon, who saved Arizona’s 4-3 series opening win on Friday, faced four batters to start the ninth and didn’t record an out.

Willson Contreras led off with a walk, advanced to second on a single by Seiya Suzuki and went to third when Ian Happ walked to load the bases. Gomes then lined a single to center to give the Cubs a 2-1 lead.

J.B. Wendelken replaced Melancon and got Patrick Wisdom to strike out. However, Wendelken then walked pinch-hitter Rafael Ortega to force in Suzuki, and Jason Heyward followed with an RBI groundout to drive in Happ and make it 4-1.

Mychal Givens (3-0) picked up the win with 2/3 of an inning of scoreless relief. Rowan Wick, despite giving up an RBI single to Daulton Varsho in the bottom of the ninth, struck out the side to pick up his third save

Varsho had two hits with an RBI and Alek Thomas doubled among his two hits and scored a run for Arizona.

The Diamondbacks took a 1-0 lead in the second inning against Chicago starter Kyle Hendricks. Ketel Marte led off with a walk and then advanced to second on a groundout by Thomas. Nick Ahmed then singled to center to drive in Marte.

Chicago tied it in the fourth when Gomes lined a two-out home run 402 feet into the bleachers in left. It was the second homer of the season for Gomes and also the first allowed in 34 1/3 innings this season by Arizona starter Zac Gallen.

Gallen, who entered the game with a 0.95 ERA, a team record for the lowest ERA after five starts to begin a season, allowed one run on two hits over six innings. He walked one and struck out nine.