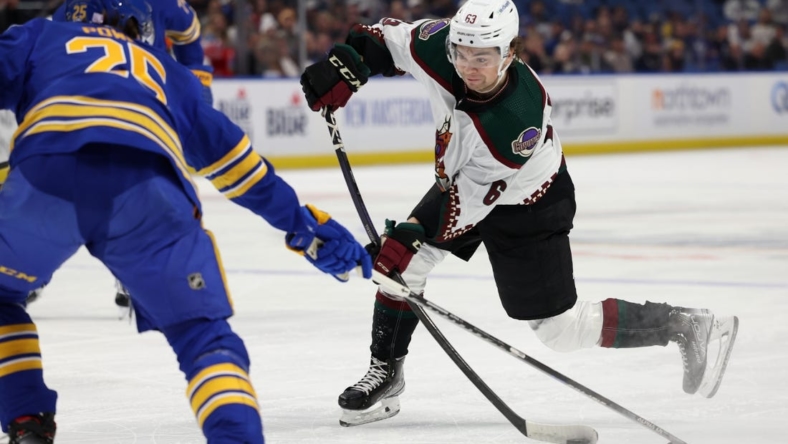 Matias Maccelli, Liam O’Brien, and Clayton Keller each had a goal and an assist as the Arizona Coyotes recorded a 4-1 road win over the Buffalo Sabres on Tuesday.

The Coyotes are 3-1-0 in their last four games, with wins in the first two contests of a 14-game road trip that runs through Dec. 7.

Tage Thompson scored the only goal for the Sabres, who have lost three consecutive games.

The Sabres held a 33-24 shots advantage over the Coyotes, plus Victor Olofsson rang a pair of shots off the goalpost. The near-misses added to Buffalo’s litany of misfortune, as the Coyotes’ first three goals were scored due to some fortunate bounces for the visiting team, and some sloppy defending from the Sabres.

Just 23 seconds into the game, Owen Power’s poor attempt at a drop pass resulted in the puck rolling in front of the Sabres’ net. Crouse was in position to score his sixth goal of the season.

During an Arizona power play 17:30 into the first frame, Maccelli’s pass into the slot hit the skate of Sabres forward Dylan Cozens and deflected into the net.

After collecting six points in 23 games during his 2021-22 rookie season, Maccelli already has nine points (one goal, eight assists) in 12 games this season.

After a scoreless second period, O’Brien’s first goal of the season extended Arizona’s lead 2:24 into the third frame. O’Brien’s shot from inside the blue line seemed to hit Cozens, re-directing the puck past goalie Eric Comrie.

Coyotes goalie Karel Vejmelka was sharp at the other end, stopping 32 of 33 shots for his fourth win of the season.

Thompson’s goal came on the power play, giving the Sabres at least one power-play goal in each of their last seven games. Buffalo is 9-for-28 in total power-play chances during that seven-game streak.