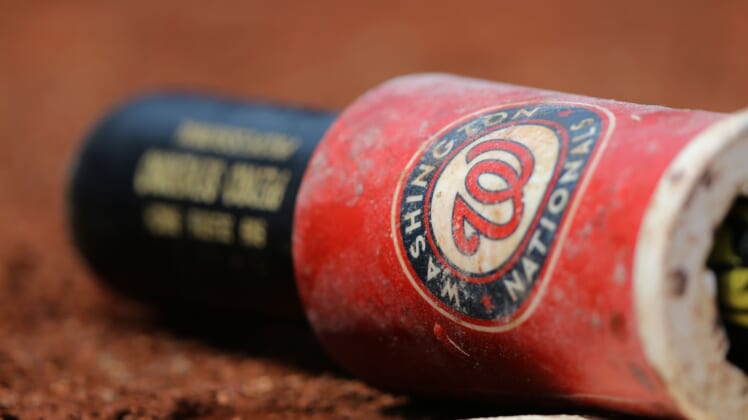 Aug 27, 2017; Washington, DC, USA; A view of the Washington Nationals logo on a bat weight in the on deck circle during the game against the New York Mets at Nationals Park. Mandatory Credit: Aaron Doster-USA TODAY Sports

The Washington Nationals will have to do some roster juggling after a positive COVID-19 test from one unnamed player was revealed on the eve of Opening Day.

In addition, general manager Mike Rizzo said that four unnamed players were considered close contacts, as was an unnamed staffer. Manager Dave Martinez is not impacted, according to the Washington Post.

The Nationals are getting set to play host to the New York Mets on Thursday night to start the 2021 season. Rizzo insisted the team is ready to play Thursday, but all five of the players in question will not be on the field.

According to reports, the five players and one staff member were on a charter flight together this week. Everybody in question was tested before the team left Florida at the close of spring training, but the positive test was not revealed until Wednesday.

MLB’s new health and safety guidelines require all players who test positive for COVID-19 to self-quarantine for at least 10 days. All close contacts must isolate for seven days and test negative by Day 5 in order to return to the club.