Conor McGregor: UFC knew of fractures prior to fight 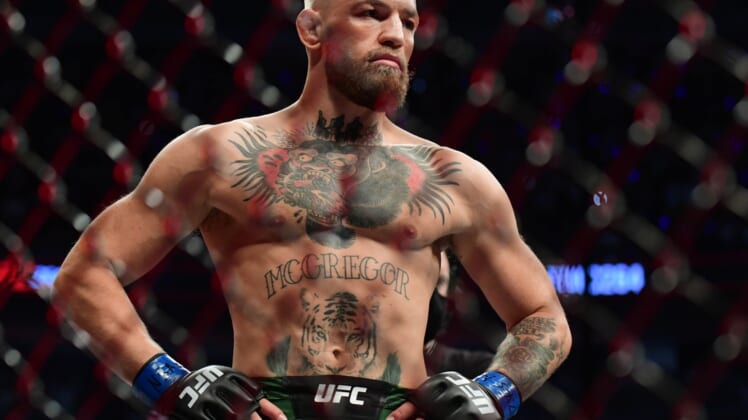 Conor McGregor on Thursday claimed the UFC was aware he had “multiple stress fractures” in his left leg prior to last weekend’s bout against Dustin Poirier.

McGregor ultimately sustained a fractured left tibia in the final seconds of the opening round of Saturday’s UFC 264 lightweight main event in Las Vegas. Poirier (28-6) was awarded the victory over the Irish superstar via TKO due to doctor’s stoppage.

“I was injured going into the fight,” McGregor said via Instagram. “People are asking me, ‘When was the leg broke? At what point did the leg break?’ Ask Dana White. Ask the UFC. Ask Dr. (Jeff) Davidson, the head doctor of the UFC. They knew I had stress fractures in my leg going into that cage.

“It was debated about pulling the thing out because I was sparring without shin pads and I would kick the knee a few times. So I had multiple stress fractures in the shin bone above the ankle and then I have trouble with the ankle anyway throughout the years of (expletive) fighting all the time. And I also was rapping my ankle every training session.”

The UFC and The Nevada State Athletic Commission have yet to publicly comment on the claims of McGregor (22-6).

McGregor, 33, underwent three hours of surgery before taking to social media to provide his initial health report on Sunday. He then added another update on Thursday.

“So, something like this happened, (I am) getting exactly what I needed, and what I needed was a titanium shin bone. Now, I have a titanium rod from my knee to the ankle, and the doctor says it’s unbreakable.”

McGregor said Sunday he will be on crutches for six weeks before beginning his rehab. White, however, told TMZ on Wednesday that he expects McGregor to be out for a year.