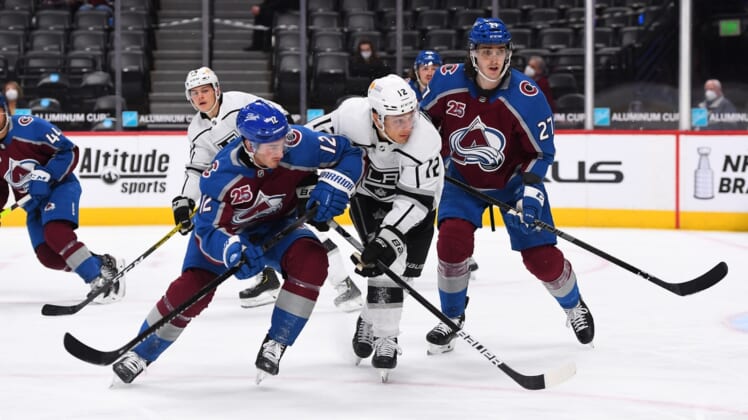 Tyson Jost scored two goals and the Colorado Avalanche clinched home-ice advantage throughout the Stanley Cup playoffs with a 5-1 win against the Los Angeles Kings on Thursday in Denver.

The Avalanche won the Presidents’ Trophy for the first time since 2000-01, the last season in which they won the Stanley Cup.

Andre Burakovsky had a goal and an assist, Pierre-Edouard Bellemare and Joonas Donskoi each scored for the Avalanche (39-13-4, 82 points), who will play the St. Louis Blues in the first round of the playoffs.

Conor Timmins and Mikko Rantanen each had two assists, and Colorado goalie Jonas Johansson made 21 saves.

Colorado went 5-3-0 against the Blues this season.

Rantanen logged five assists in the last two games to finish with the team lead in points at 66 (30 goals, 36 assists). Nathan MacKinnon, who sat out the final two regular-season games due to an unnamed injury, wound up with 65 points (20 goals, 45 assists).

Sean Walker scored and Troy Grosenick made 38 saves for Los Angeles (21-28-7, 49 points). The Kings matched their season high with their fifth straight loss (0-4-1) and were outscored 11-1 in the final two games against the Avalanche.

The Kings scored with 45 seconds left in the first period to take a 1-0 lead, but the Avalanche scored five times over the final 10:14 of the second period to grab a 5-1 lead.

Grosenick made five straight saves before Bellemare came in behind on a rebound and pushed in the puck to make it 3-1 at 14:26.

Donskoi joined Bellemare by also scoring for the second consecutive game. He batted the puck into the net after it caromed in the air off Grosenick, stretching the lead to 4-1 at 16:50.

Burakovsky finished off the second-period barrage by scoring with 1:02 left to make it 5-1.

Grosenick was making just the fourth start of his NHL career. He made his only other start this season against the Anaheim Ducks on March 10, when he made 33 saves in a 5-1 victory. His other two NHL starts came during the 2014-15 season with the San Jose Sharks.