Where college football teams stand in the rankings at the halfway point in the season matters little in the grand scheme of things. Every high-ranked team is just one upset special away from seeing all their success weigh little on the scales when the season comes to its end.

Week 8 features a quartet of matchups that could spell doom for teams striving to be one of the four to compete for the national championship.

In some cases, it’s because the opposing team is a worthy adversary, while in one the favorite must overcome some other obstacle. In every case, they are on the road, which is always a challenge in and of itself.

The following four teams are on upset alert.

You can see the entire AP Top 25 here.

Before we get into Ohio State’s issue, we should first acknowledge Rutgers as a formidable team. However, if the Buckeyes can get their offense past third gear, then the Scarlet Knights will be in “run away!” mode from that point on to the conclusion of the lopsided affair.

But that’s the problem with Ohio State this year. Urban Meyer gave Cardale Jones every chance to succeed, but unfortunately he couldn’t rekindle the magic he displayed last winter when he helped lead the Buckeyes to a championship.

Now, with J.T. Barrett as the starter (at least for now), we’re going to see if all the tremendous talent assembled on Ohio State’s offense can come together and play as one unit. It has yet to happen this year, barring a few quarters in which everyone seemed to be in synch.

Rutgers will give this team a run for its money if this doesn’t occur. Aside from the blowout loss to Penn State, the Crimson Knights have been competitive in every contest and came close to beating Michigan State (No. 7). 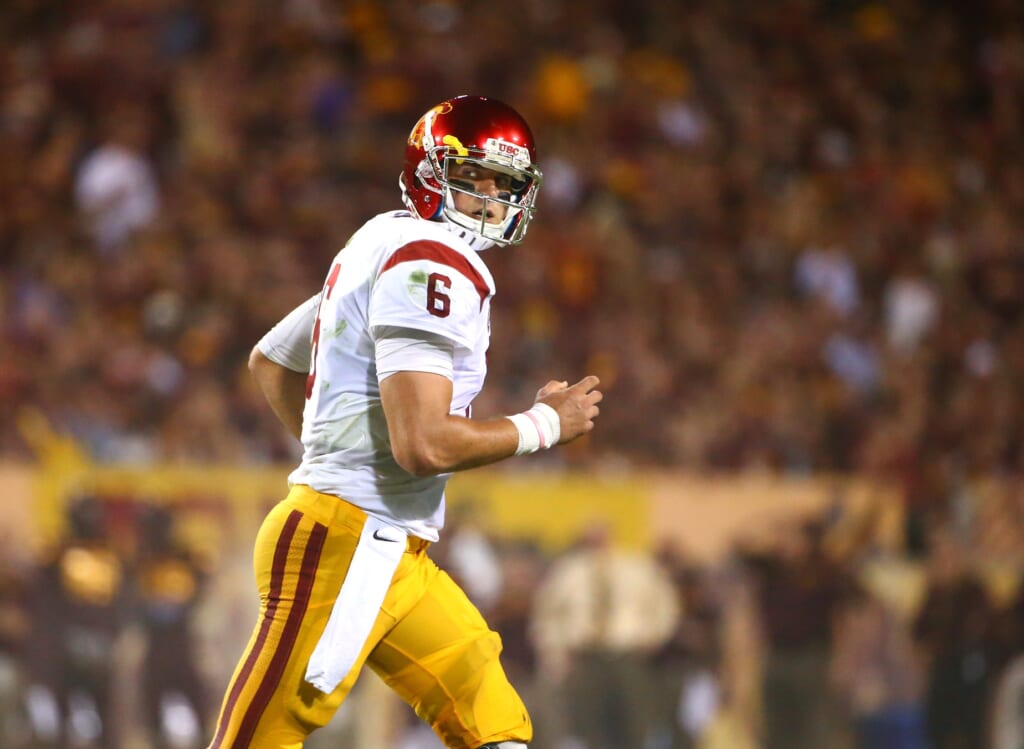 USC at 3-3 midway though the 2015 college football season isn’t what anyone envisioned before it began. Loaded with talent on both sides of the ball, the Trojans came into the campaign ranked No. 8 overall. Off-field issues took their toll on this proud program, and it suffered some heavy blows.

But there is no better time than right now to make a national statement. Senior quarterback Cody Kessler has a chance to rally his team at home for a huge upset over Utah, which has yet to taste defeat.

Utah finds different ways to win, so it won’t be easy. If Devontae Booker gets shut down, quarterback Travis Wilson usually finds a a way to get it done. And, if the offense isn’t clicking, it usually isn’t long until the defense makes a big play to turn things around.

Despite all this, USC has the firepower offensively to stay with Utah, provided everyone is on the same page. Washington showed how to rattle Kessler with pressure, and the Utes will likely follow the same game plan. But if he gets some protection and keeps his head, then Kessler can lead a huge upset at home to atone for the two losses already suffered at the Memorial Coliseum this year.

Clemson has been impressive so far with an outstanding defense and electric offense, led by sophomore Deshaun Watson. Undefeated to this point, the Tigers have a huge victory over Notre Dame already to their credit, but there is an aspect to all their success that cannot be overlooked: The Tigers have only played one game away from home in 2015.

Their only road game came in their third game of the season against Louisville, and the Cardinals nearly won that game.

On that note, and of grave importance regarding this upcoming road game at Miami, is the fact that Watson has thrown at least one interception in every game so far, and he threw two against Louisville. Should he have another multi-interception game this weekend at Sun Life Stadium, Clemson could lose this game.

The Hurricanes are undefeated at home. With a little love from the crowd and a couple gifts from Watson in the form of turnovers, Brad Kaaya and his offense will have a tremendous opportunity to score some easy points and lead an upset over the Tigers.

The Aggies scraped and clawed their way from being unranked at the start of the season all the way up to the No. 9 spot before being humbled by Alabama last weekend. Like ‘Bama, another one-loss team, they still have a shot at making it tough on the voters if they finish with no more losses.

A bounce-back win is needed for Kevin Sumlin’s program after the 41-23 beat down at the hand of the Crimson Tide. But Texas A&M isn’t alone in this place of desperation. The Rebels, which were once riding high at No. 3 before Florida crushed their spirits, have now lost two games and must continue winning in order to stay relevant as a Top-25 team.

When they’re on, nobody in the nation can keep up with the Rebels offensively save perhaps Baylor or TCU. They are, in fact, favored to win at home, which shouldn’t really come as a surprise.

Quarterback Chad Kelly is one of the best in the nation of getting hot, as his 16 touchdowns clearly illustrate. He is streaky, though, and if he is off then the entire offense struggles to move the chains. On the other side, the Aggies have a not-so-secret weapon in pass-rusher Myles Garrett, who certainly could cause one of Kelly’s “off” days to come to fruition.

It shouldn’t be a big surprise, therefore, if the Rebels end up underperforming once again, while the Aggies let out their frustrations after the embarrassing loss to Alabama.