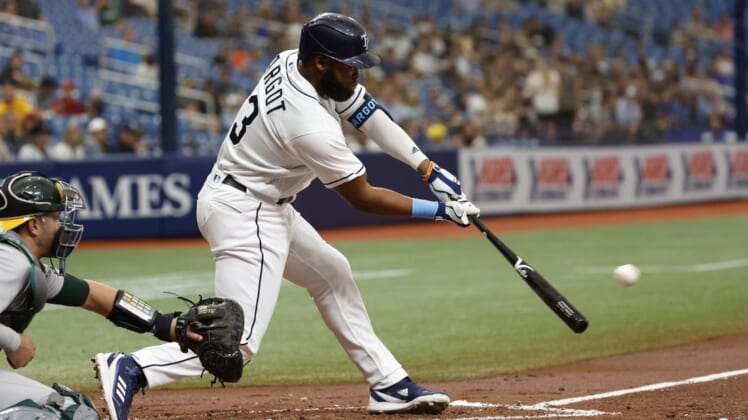 The Oakland Athletics used a strong performance by starter Cole Irvin and a fluke play on offense on their way to a 6-3 victory over the Tampa Bay Rays on Thursday afternoon at St. Petersburg, Fla.

Irvin’s outing followed closely on the heels of a solid performance by ace Frankie Montas in Oakland’s 4-2 win on Wednesday. The Athletics won three of the four games in the series.

Oakland moves onto a three-game series in Toronto on Friday that will complete a 10-game road trip before its home opener against Baltimore on Monday.

The Athletics’ success in St. Petersburg largely was due to strong pitching performances.

But Irvin’s outing may not make as many highlight reels as an unusual play in the second inning that gave Oakland a 3-0 lead.

With Kevin Smith and Elvis Andrus already on base, Cristian Pache hit a ball through the infield and into center field. As Randy Arozarena tried to field the ball, he kicked it toward the wall. Smith and Andrus scored with ease and Pache was able to circle the bases.

With two outs and two strikes, Pache made a check swing on a pitch that was ruled a ball. The Rays, however, unsuccessfully argued that Pache had struck out.

Irvin outdueled Tampa Bay starter Josh Fleming (1-1) as the Rays continue to deal with injuries to their pitching staff. Ryan Yarbrough (groin) and Luis Patino (oblique), who were expected to be in the starting rotation at the beginning of the season, have been sidelined by injuries.

Although Irvin kept Tampa Bay’s bats mostly silent, he exited the game in the seventh inning after Brandon Lowe hit a two-run home run. Relievers Domingo Acevedo, A.J. Puk and Dany Jimenez came on to hold the Rays scoreless the rest of the way, with Jimenez earning the save after one hitless inning of work.