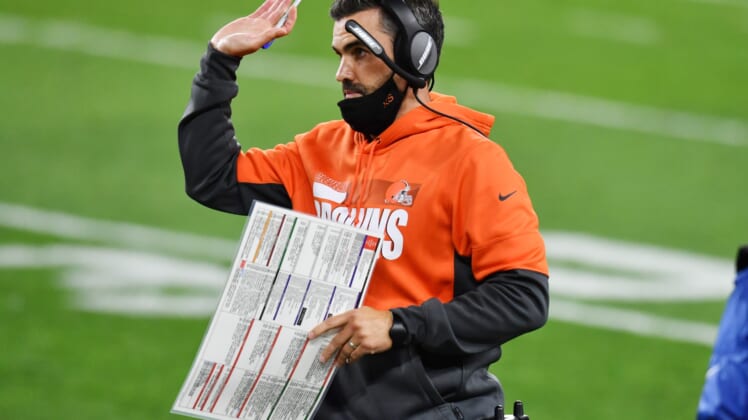 The Cleveland Browns appear as though they’ll head to Wild Card Weekend without head coach Kevin Stefanski, who tested positive for COVID-19 on Tuesday.

Stefanski led the Browns to an 11-5 record and their first playoff berth since 2002, but their chances of winning against the Pittsburgh Steelers this Sunday just took a huge hit.

ESPN insider Adam Schefter had the news on Stefanski, along with the Browns’ other COVID-19 problems as their untimely outbreak continues:

Cleveland missed its top four receivers for Week 16’s loss to the lowly New York Jets and had several key starters missing from Week 17’s narrow victory over Pittsburgh, who was resting many of its best players ahead of the postseason.

As for Priefer, he knows Stefanski from their shared history in the Minnesota Vikings organization. A veteran special teams coach, Priefer is a no-nonsense type of coaching personality who’s helped Cleveland’s special teams improve since joining the staff in 2019.

Even when Freddie Kitchens was fired after one year as Browns head coach, Stefanski retained Priefer in building out his new staff.

It’s just an absolute nightmare scenario for the Browns, because Stefanski also calls the shots on offense and has been masterminding the game plans to make Cleveland one of the NFL’s elite rushing attacks.

Although other coaches will be missing, it’s unclear how much of the Browns’ offensive staff will be available, or if o-line coach Bill Callahan, assistant line coach Scott Peters and receivers coach Chad O’Shea return after missing Week 17 due to COVID-19 protocols.

As mentioned above, Stefanski is to be replaced by offensive coordinator Alex Van Pelt for play-calling duties. Van Pelt has primarily been a quarterbacks coach and once played the position in the NFL as a backup. He’s going to be key to making Browns signal-caller Baker Mayfield feel comfortable against Pittsburgh’s vaunted defense.

It’s hard to imagine Cleveland not missing a beat without Stefanski’s steady leadership in place, not to mention the fact that Van Pelt hasn’t had the experience of calling plays for the Browns.

The game plan shouldn’t alter too much even with Stefanski out of action, though — provided Cleveland sticks to what has worked and doesn’t go off the rails like in Week 16. In that defeat to the Jets, Mayfield attempted 53 passes despite being so shorthanded at receiver. Not ideal.

Playoff football is often about running the ball and stopping the run, despite the preponderance of premium passing attacks and superstar quarterbacks in the modern pro game. If the Browns’ two-headed backfield monster of Nick Chubb and Kareem Hunt can help control time of possession and Cleveland can stop the Steelers’ lackluster rushing attack, that could equate to a winning formula.

The key is for Mayfield to avoid making mistakes or putting the ball on the ground, which he did three times against the Jets. Against Pittsburgh’s pass rush, it’s possible Mayfield will fumble, but helping his cause is one of the league’s best pass protecting units.

Expect a heavy dose of Chubb and Hunt on the ground as the underdog Browns try to tire out T.J. Watt, Cameron Heyward and the dynamic Steelers front seven, setting up some play-action passes that Mayfield has thrived in using, particularly during the second half of the 2020 campaign.

Making the playoffs in and of itself is an accomplishment considering where Cleveland has been for the better part of two decades. Nevertheless, Stefanski’s absence increases the chances that it could be a short-lived, demoralizing, one-and-done affair.