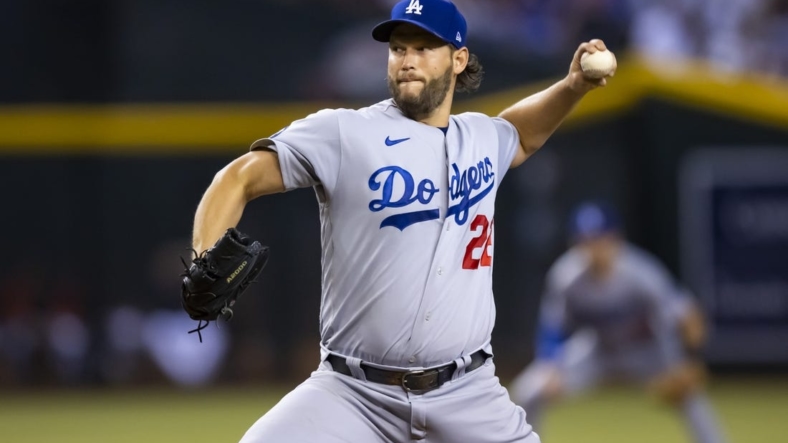 Clayton Kershaw gave up two hits over seven scoreless innings and the Los Angeles Dodgers won the National League West title for the ninth time in 10 seasons with a 4-0 victory over the Arizona Diamondbacks on Tuesday night at Phoenix.

Kershaw (8-3) struck out five and walked one in a crisp 82-pitch effort. He allowed singles to Geraldo Perdomo in the third inning and Emmanuel Rivera in the seventh.

Caleb Ferguson worked out of a jam in the eighth and Craig Kimbrel tossed a perfect ninth in a non-save situation to finish up a three-hitter as the Dodgers improved to 11-2 this season against the Diamondbacks.

Arizona (66-75) has lost six of its past seven games. The Diamondbacks have produced just eight hits and no runs while losing the first two contests of the three-game series.

Arizona’s Merrill Kelly (12-6) gave up three runs on five hits over five innings as his 13-start unbeaten stretch ended. Kelly struck out eight, walked a season-worst five and served up the homers to Gallo and Freeman.

Muncy reached on an infield single to start the second inning. One out later, Gallo crushed a 438-foot blast over the wall in center to make it 2-0. Gallo has five homers since joining the Dodgers last month and 17 overall this year.

Freeman led off the third with a 442-foot blast that cleared the pool in right-center. The homer was Freeman’s 20th of the season.

Muncy made it 4-0 in the seventh when he slugged a two-out homer to right. The blast was Muncy’s 20th of the campaign.

After Kershaw departed, Arizona’s Jordan Luplow walked and Daulton Varsho singled to start the eighth. However, Ferguson struck out Perdomo and induced Carson Kelly to hit into an inning-ending double play.