Cincinnati Reds get jump on Brewers, coast to win 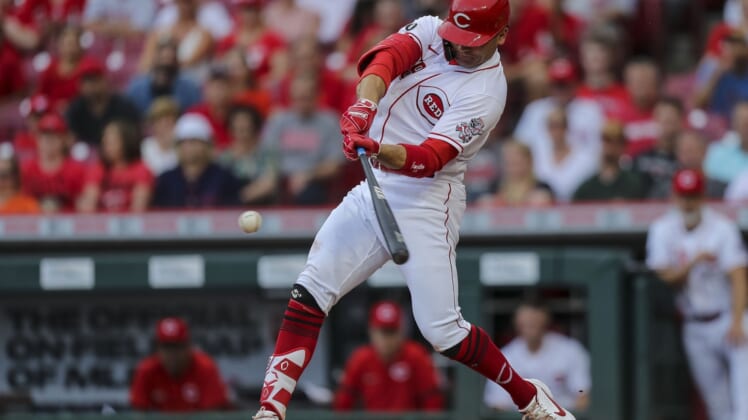 Nick Castellanos added a two-run double for Cincinnati, which won for the fifth time in six games.

The Brewers lost for just the fourth time in 17 games but may have lost something bigger, as third baseman Travis Shaw left in the second inning with a dislocated left shoulder.

Gutierrez (2-1), a 25-year-old rookie making just his third major league start, limited the Brewers to six hits and two runs over seven innings, throwing 102 pitches in his longest outing of the season. He struck out seven and walked three.

Some odd plays for both teams highlighted a first inning that saw both teams score.

Gutierrez hit Luis Urias with the first pitch of the game. Two outs later, Avisail Garcia singled between Reds shortstop Kyle Farmer and second baseman Jonathan India when Farmer, who had the routine grounder in his sights, slowed down to avoid colliding with India, who was shifted over to the left side of the field.

As Gutierrez was preparing to pitch to Omar Narvaez, he started his motion and then stopped, balking home Urias for a 1-0 Brewers lead. Narvaez grounded out to end the frame.

The Reds quickly took the lead in the bottom of the first.

It started with one out on Jesse Winker’s infield hit, when he beat the tag from Anderson on a soft grounder to the right side. Castellanos grounded a ball to the same spot, and this time Anderson rushed his throw to first. His errant throw allowed Castellanos to reach. Stephenson’s double and Joey Votto’s groundout produced runs and a 2-1 lead.

The Reds added three more in the second when India grounded a ball off the glove of a diving Shaw at third base, scoring Scott Heineman from second base and sending Gutierrez, who had singled, to second. Shaw landed hard on his left shoulder and spent several minutes prone on the ground as training staff tended to him. He left the field under his own power.

One out later, Castellanos doubled home India and Gutierrez for a 5-1 Cincinnati lead.

Stephenson’s two run double in the fourth off reliever Eric Lauer made it 7-1, before a Garcia sacrifice fly scored Urias to make it 7-2.

Daniel Vogelbach’s towering homer to right field off Reds reliever Heath Hembree closed out scoring in the ninth. The Reds were 5-for-14 with runners in scoring position while Milwaukee was 0-for-10.