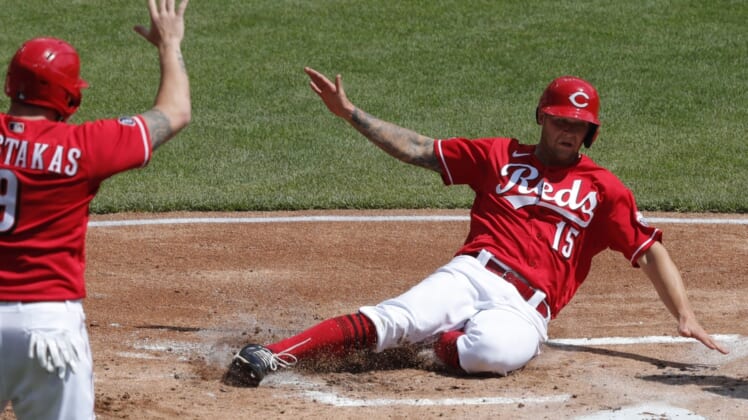 Tyler Naquin led off the bottom of the first with a home run for the second straight day, Kyle Farmer added a two-run double later in the inning and the Cincinnati Reds completed a three-game demolition of the Pittsburgh Pirates with an 11-4 romp on Wednesday afternoon.

Luis Castillo (1-1), bombed for eight hits and eight earned runs in an Opening Day loss to St. Louis, rebounded with seven shutout innings, limiting the Pirates to four hits. He walked one and struck out five.

Chad Kuhl (0-1), battling his control for the second consecutive start, took the loss.

Less than 24 hours after taking Trevor Cahill’s fourth pitch deep to ignite a 14-1 romp, Naquin jumped on Kuhl’s first offering for his fourth home run of the season.

Kuhl’s problems were just getting started. After an error put Nick Castellanos on base, Kuhl walked Joey Votto, Mike Moustakas and Nick Senzel to force in a second run.

Jonathan India’s sacrifice fly made it 3-0 before Farmer capped a five-run uprising with his two-RBI double.

Castellanos added a homer, also his fourth of the season, in the fifth inning before Tyler Stephenson hit his first and Aristides Aquino added his second in back-to-back fashion in the eighth for the Reds, who outscored the Pirates 30-8 in the three-game sweep.

Kuhl, who lasted only three innings on Opening Day despite allowing just one hit, made it through only four his second time around despite not allowing a hit past the first inning.

He was charged with five runs (four earned) on two hits, walking five and striking out five. He now has eight walks in seven innings this season.

Senzel finished with two hits, including a triple, two RBIs and two runs for the Reds, who have won five straight since their loss on Opening Day.

Now winless in five straight since an Opening Day win over the Chicago Cubs, the Pirates were held scoreless until Erik Gonzalez belted a grand slam, the first of his career and his first homer of the season, off Amir Garrett.

Wilmer Difo had three hits, including a leadoff double in the ninth, and Phillip Evans had two for the Pirates, who were out-hit 10-7.