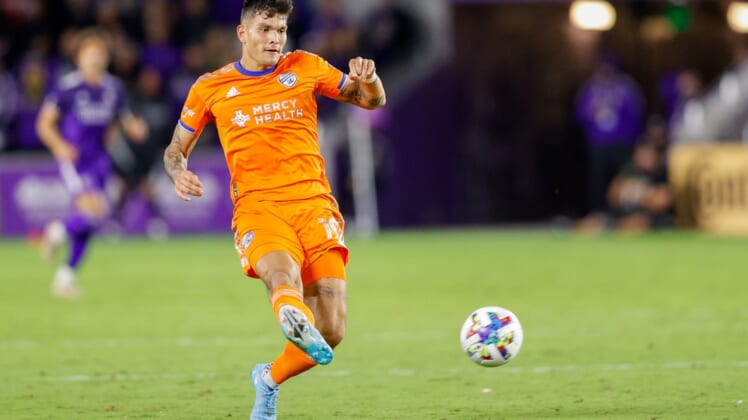 If FC Cincinnati are to build on a long-awaited victory, they must find a way to finally get the best of Inter Miami CF.

Goals by Brandon Vazquez on either side of halftime gave Cincinnati (1-2-0, 3 points) a 2-1 victory at Orlando City SC last weekend, snapping a 14-game losing streak that dated to a 2-0 triumph over Toronto FC on Sept. 11.

That was also the last home victory for FC Cincinnati, who are trying to win consecutive contests for the first time since June 23-26.

“I think this was an important win,” Cincinnati coach Pat Noonan told the official MLS website. “Just for the confidence of the group, and moving into our fourth game, having won a game and understanding that this group is going to win — and we’re moving in the right direction.”

Vazquez provided FCC with their first goals of 2022.

Cincinnati has been outscored 11-4 in losing all four previous meetings with Inter Miami (0-2-1, 1 point).

Miami, however, has tallied just one goal this season (by Leonardo Campana) and will try to avoid a third straight loss following last weekend’s 2-0 defeat to Los Angeles FC. Inter has yielded seven goals in the last two games.

“There’s no need to panic, it’s only three games in,” defender Damion Lowe told Miami’s official website. “It’s a long season. We just have to continue, and keep growing together as a family.

“I’m confident in my teammates that we’re going to do well.”

Inter has dropped six of its last seven road matches overall but owns a 4-2 goal advantage during its two victories at Cincinnati. Miami’s Brek Shea and Gonzalo Higuain split those four goals recorded at FCC.