Are the Cincinnati Bengals Losing Confidence in Andy Dalton?

The Cincinnati Bengals’ selection of running back Jeremy Hill in the second round of the 2014 NFL draft could be seen two ways. Cincinnati could be looking to build a dynamic duo by teaming Hill up with second-year star Giovani Bernard to build one of the best running back groups in the league.

It could also be seen as an indictment on quarterback Andy Dalton, who has failed to lead this team to a playoff victory in his three years as the starter. Exhausting a second rounder, especially in a deep draft, at a position where you already have a starter is somewhat questionable. Doing so when you are a piece or two away from being a legitimate Super Bowl contender definitely raises questions.

It’s now being reported that the Bengals may very well look to limit Dalton’s pass attempts in 2014 (via Bengals.com).

New offensive coordinator Hue Jackson is committed to changing it (pass-first philosophy) and I think he’s also committed to taking the load off Andy Dalton. A big adjustment that has to make is cutting his pass attempts from 586 to closer to Russell Wilson’s number of 407.

A lot of the criticism that was thrown the way of former offensive coordinator Jay Gruden last year is that he ignored the weapon that was Giovani Bernard throughout the season. As to where Dalton averaged over 36 pass attempts per game, Bernard put up just 10.6 rush attempts per outing. Sure the presence of veteran BenJarvus Green-Ellis in the backfield limited Bernard’s attempts, but that’s ridiculous.

To heck with the short stuff. The running game should open up the deep ball and with Jackson’s experience under Al Davis you can believe they’ll be running many more vertical routes. 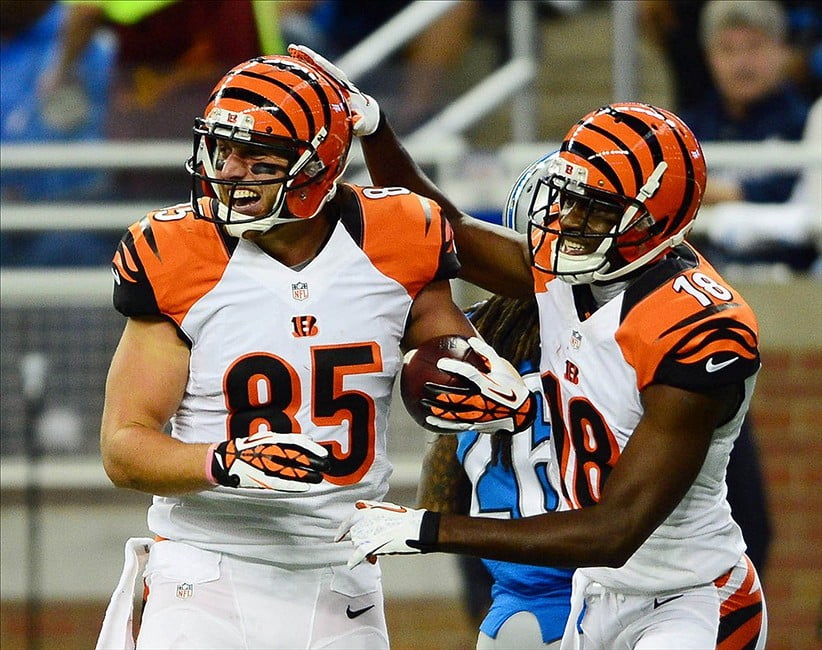 Now this makes a ton of sense. With the receiving threats that Cincinnati has down the field, especially A.J. Green on the outside and Tyler Eifert between the hashes, a strong commitment to the run could open things up down the field.

Again, that’s likely going to be the Bengals focus as training camp gets going later this summer. And Dalton will have to make sure that he’s up to looking down the field more, rather than going for the checkdown.

Just how much of this is an indictment on Dalton or is it the Bengals recognizing that they need to start utilizing their superior talent in a better way?

Dalton has seen both his pass attempts and interceptions increase in each of his first three seasons in the NFL. It goes without saying that his interception percentage has increased during the same span. It’s highly unlikely that Dalton will ever be that guy who can be the face of an offense. Instead, he’s going to have to play a more limited role.

It’s now time for Dalton to break out of his funk and lead this franchise to a rare playoff win. If he doesn’t do that, A.J. McCarron or someone else will get a shot following the 2014 season, because the status quo simply isn’t working.

At least, the Bengals are finally starting to understand this.