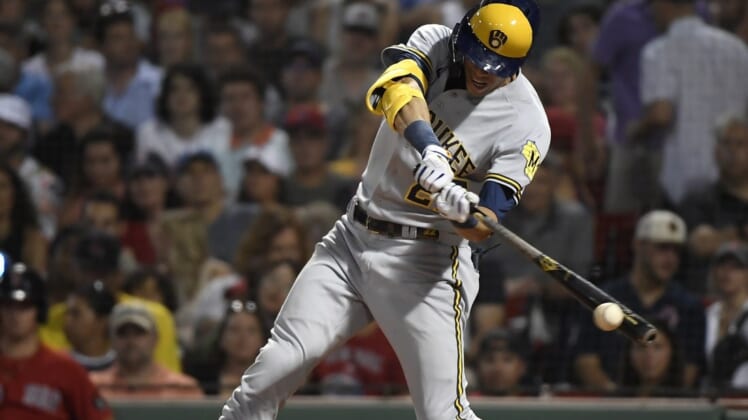 Christian Yelich’s seventh-inning single proved to be the difference as the Milwaukee Brewers opened their first series in Boston since 2014 with a 4-1 win over the Red Sox on Friday night.

Willy Adames went 3-for-5 and drove in a run, and Yelich was 2-for-4 with a double, run scored and an RBI for Milwaukee, which has won three straight games and six of seven since the All-Star break.

The Brewers scored first in the sixth inning, pulled back ahead in the seventh and padded their lead with a two-run ninth.

Brewers starter Brandon Woodruff (9-3) was outstanding over 6 1/3 innings, striking out nine while allowing just one run on four hits. Josh Hader struck out the side in the ninth for his 29th save.

Alex Verdugo drove home Christian Vazquez with the lone Red Sox run. Both were 2-for-4.

The Red Sox have lost three of their last four.

The Brewers broke a scoreless deadlock in the sixth as a Yelich double just inside third base and an Adames infield single set up Andrew McCutchen for an RBI grounder.

The teams were held to just one hit apiece — both in the first inning — until Milwaukee scored first.

Adames hit a one-out single, but Boston starter Austin Davis retired the next two batters and escaped the jam with a two-strikeout opening frame.

Boston’s opening hit was a Vazquez single. After Woodruff issued a one-out walk to Franchy Cordero in the second, 13 straight Boston hitters were retired.

The hosts broke Woodruff’s streak and tied the score as Vazquez and Verdugo connected for back-to-back doubles in the bottom of the sixth.

In the seventh, Tyrone Taylor tripled into the center-field triangle before Yelich lined Milwaukee’s go-ahead RBI single into center on the first pitch Ryan Brasier threw in relief of Bello.

The Red Sox squandered opportunities to even the game and then some, leaving two runners on base twice in the late innings. Brad Boxberger inherited two on with one out in the seventh, while Devin Williams worked around eighth-inning hits by Jarren Duran and Verdugo.

Adames grounded a two-out single to left to make it a three-run game.