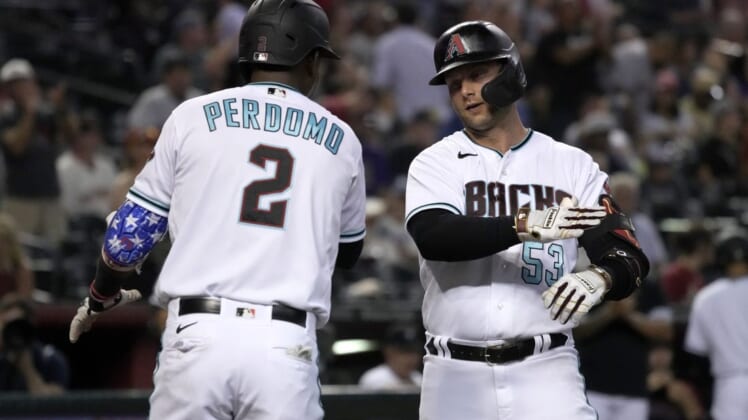 Christian Walker hit a tiebreaking three-run homer and the Arizona Diamondbacks won for the fifth time in six games, knocking off the San Francisco Giants 7-3 on Tuesday night at Phoenix.

Sergio Alcantara smacked a two-run blast for the Diamondbacks, who are 5-3 against San Francisco this season after going 2-17 against their National League West rivals in 2021.

Wilmer Flores hit a two-run homer for the Giants, who matched their season-worst losing streak of six games. San Francisco has lost 22 of its past 33 contests and has fallen below .500 (48-49) for the first time in over a year.

Arizona’s Ian Kennedy (4-4) retired all five batters he faced in relief to pick up the win. Mark Melancon struck out two in a flawless ninth in a non-save situation.

San Francisco’s Carlos Rodon (8-6) lost to the Diamondbacks for the second time this month. He struck out 10 on Tuesday while giving up five runs, three hits and two walks.

Walker’s pivotal homer, his 23rd of the season, came in the bottom of the third inning.

Rodon walked Geraldo Perdomo and hit Carson Kelly with a pitch to start the inning before striking out Jordan Luplow and Ketel Marte. Walker came up and slammed a first-pitch fastball 394 feet to left to give Arizona a 5-2 lead.

The Giants moved within two in the top of the sixth on Brandon Belt’s RBI double off the fence in center against Kyle Nelson. Thairo Estrada, who was hit by Luke Weaver’s pitch to start the frame, scored from first.

Arizona starter Tyler Gilbert gave up two runs and four hits over four innings. He struck out two and walked one.

Walker walked to start the bottom of the second inning and Alcantara came up with two outs and hit a drive that barely cleared the fence in left to give Arizona a 2-0 edge. It was Alcantara’s third homer of the season.

San Francisco knotted the score in the top of third as Luis Gonzalez singled to open the inning and Flores slugged a one-out homer to left. The blast was Flores’ 14th of the season.