Chris Paul proved to be the missing piece for the Phoenix Suns, helping spark a breakout season from Devin Booker and guiding this team to reach its potential. After proving himself once again, Paul could have a great opportunity to cash in this summer.

Paul, one of the highest-paid players in the NBA, landed in Phoenix last offseason. The veteran point guard immediately stepped in as the leader of a young team, also demonstrating he can play at an All-Star level. While the 36-year-old is focused on winning his first NBA title, NBA rumors are already flying about where he’ll play next season.

Owed $41.358 million this season, CP3 will have a decision to make in a few weeks. He must decide whether or not to exercise his $44.2 million player option. While it’s a contract many players wouldn’t walk away from, the future Hall of Famer is expected to decline and to hit the open market.

Even as the playoffs roll on, Paul’s future is one of the most discussed topics around the league. While many fans are thinking about potential landing spots, team officials are debating how much the 15-year veteran will land on the open market.

According to Sports Illustrated’s Chris Mannix, NBA executives believe Paul will sign a contract in the range of $60 million over three seasons. 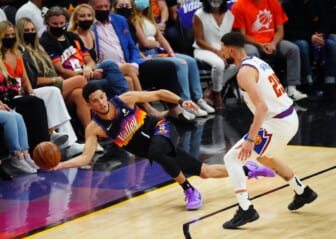 There is certainly an element of risk for Paul. Previous reports suggested he wanted $100 million over three seasons. But given the financial losses teams suffered due to the COVID-19 pandemic and concerns over a 36-year-old’s durability, that figure might be hard to reach.

If Paul is willing to take a discount, he could return home to California and sign with the Los Angeles Lakers. But other contenders, like the Suns and New York Knicks, will have more cap space to offer him this summer.

Once Phoenix’s season ends, Paul will have plenty of time to make a decision. Making $42 million next year and playing for one of the NBA’s best teams is an attractive option, but Paul would be wise to explore all of his options.