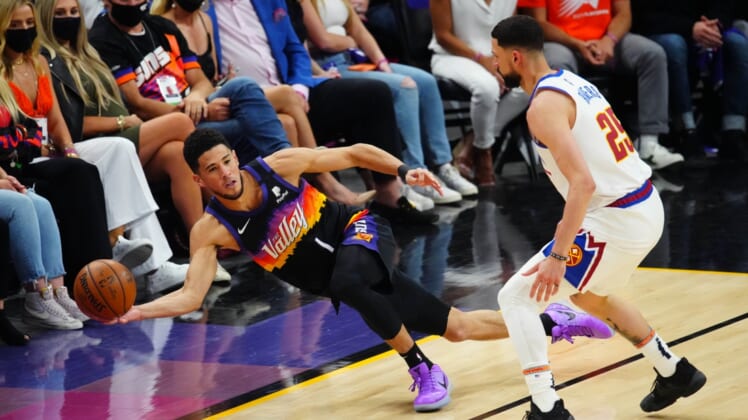 Jun 9, 2021; Phoenix, Arizona, USA; Phoenix Suns guard Devin Booker (1) passes the ball as he dives to save it from going out of bounds against Denver Nuggets guard Austin Rivers in the first half during game two in the second round of the 2021 NBA Playoffs at Phoenix Suns Arena. Mandatory Credit: Mark J. Rebilas-USA TODAY Sports

Chris Paul recorded 17 points and 15 assists without committing a turnover, helping the Phoenix Suns roar to a 123-98 victory over the visiting Denver Nuggets on Wednesday night to take a 2-0 lead in the Western Conference semifinals.

Devin Booker scored a team-best 18 points and collected 10 rebounds for the Suns, who have won five consecutive postseason games. Phoenix won the first two games of this series by an average of 21 points.

Denver’s Nikola Jokic, the NBA’s newly selected Most Valuable Player, had 24 points, 13 rebounds and six assists despite sitting out the entire fourth quarter.

Game 3 of the best-of-7 series will be played Friday night in Denver.

Mikal Bridges scored 16 points and Deandre Ayton added 15 points and 10 rebounds for the Suns, who shot 47.9 percent from the field and were 18 of 38 (47.4 percent) from 3-point range. Jae Crowder tallied 11 points and reserve Torrey Craig had 10 for Phoenix.

Denver’s Will Barton played for the first time since injuring his right hamstring on April 23, and he scored 10 points in 16 minutes. Michael Porter Jr., who played despite a back ailment, had just 11 points on 3-of-13 shooting, making just 2 of 9 from 3-point range.

Paul Millsap contributed 11 points for the Nuggets, who made 40 percent of their field-goal attempts, including 14 of 43 (32.6 percent) from behind the arc.

Phoenix led 52-42 at halftime and then exploded in the first two minutes of the third quarter.

Crowder buried two 3-pointers and Ayton scored the other four points during a 10-1 burst that boosted the lead to 19.

Paul later knocked down a jumper to increase the Suns’ lead to 69-48 with 6:57 left in the stanza. The advantage reached 22 late in the quarter before Phoenix settled for an 86-67 cushion entering the fourth.

Cameron Johnson and Bridges hit back-to-back 3-pointers to increase the margin to a game-high 31 just before the midway point of the quarter.

Earlier, Booker scored 13 points to help Phoenix hold the 10-point halftime lead. Jokic scored 15 prior to the break for Denver.

Dario Saric knocked down a 3-pointer for the final points of the first quarter to give the Suns a 25-21 lead. He connected on another trey to give Phoenix a 35-25 advantage with 8:32 remaining in the half.