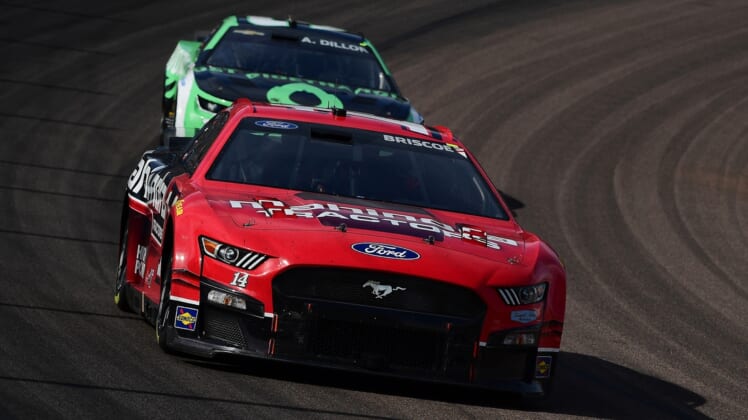 Chase Briscoe secured his first career victory by keeping the lead across the last 80 laps to win the Ruoff Mortgage 500 on Sunday at Phoenix Raceway in Avondale, Ariz.

On a restart with four laps to go, Briscoe moved to the front with the aid of a slight bump from Ross Chastain.

Chastain ended up second and Tyler Reddick took third place. Chastain and Reddick are still seeking their first career victories on the Cup circuit, forming a trio of drivers grinding hard at the end. Briscoe protected the inside of the track as Chastain attempted a late pass.

Briscoe, a 27-year-old from Indiana, did a couple donuts upon winning the race and then hopped out of his car to salute the fans. He had led a total of 38 laps in his Cup career prior to this race.

Briscoe led a total of 101 out of 312 laps around the 1-mile circuit. He became the 200th different winner in the Cup series.

The last restart came after Chase Elliott spun out on the back side. Elliott ran second behind Briscoe with less than 30 laps to go. They were less than 1 second apart.

When Briscoe took the lead following a restart with 83 laps left, Reddick was outside the top 10, but he moved up during the final quarter of the race.

Pole sitter Ryan Blaney ended up in fourth place. He lost the lead spot earlier in the race along pit road. He did turn the fastest lap of the race at 130.78 mph.

Briscoe had to hold off a variety of drivers across the final third of the race. Kevin Harvick, one of Briscoe’s teammates, was among the lead cluster for portions of the race.

William Byron was the Stage 1 winner.

Austin Dillon wrecked his car as the leaders were crossing the finish line.