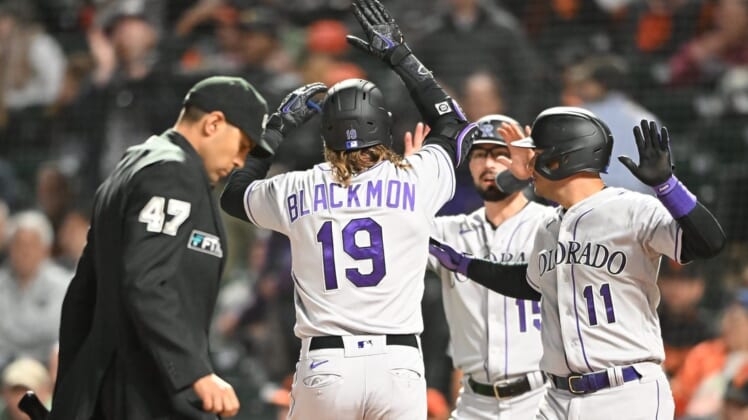 Charlie Blackmon swatted a pinch-hit, three-run homer into McCovey Cove in the sixth inning on Tuesday night to lead the Colorado Rockies to a 5-3 victory over the host San Francisco Giants.

The homer was Blackmon’s ninth of the season and 200th of his career and it helped the Rockies beat the Giants for the second straight time after losing the previous 12 meetings.

Connor Joe reached base three times and had a leadoff homer among his two hits for the Rockies. Joe has reached safely in his last 33 games, the longest active streak in the majors.

Yonathan Daza and Randal Grichuk also had two hits apiece as Colorado halted a four-game slide and won for just the eighth time in its last 28 contests.

Right-hander Daniel Bard struck out two in a perfect ninth for his 12th save for Colorado.

Wilmer Flores had a homer among his three hits for San Francisco.

Jose Iglesias and Grichuk led off the sixth inning with singles off Giants right-hander Zack Littell (1-2). The runners moved up on an infield out and Rockies manager Bud Black called on Blackmon to come off the bench.

San Francisco manager Gabe Kapler hurried out of the dugout to bring in left-hander Jose Alvarez but the strategy backfired when Blackmon rocketed the fourth pitch 423 feet into the water beyond right field to give the Rockies a 5-3 lead.

Joe led off the game with a homer that barely cleared the left-field fence. It is his fifth of the campaign.

The Giants scored three runs in the bottom of the frame. Mike Yastrzemski drew a one-out walk and Flores followed with a blast to left for his seventh homer and Luis Gonzalez delivered a two-out RBI single later in the inning.

Colorado moved within 3-2 in the third when C.J. Cron hit a sacrifice fly to left to score Joe from third.