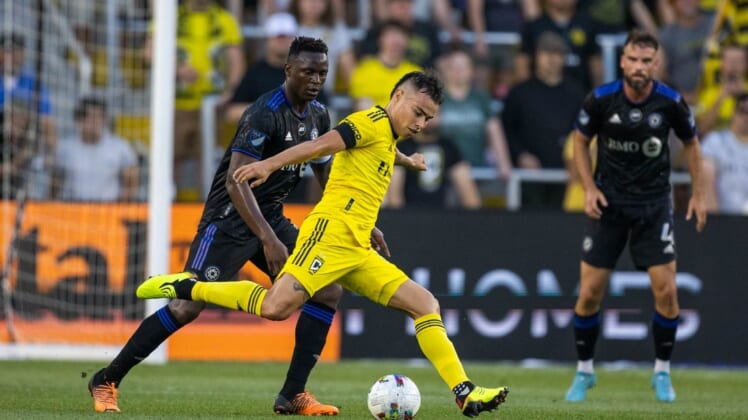 Joel Waterman scored the winner in the fourth minute of second-half stoppage time as CF Montreal rallied late to stun the host Columbus Crew 2-1 on Wednesday in a weather-delayed match.

Kamara’s goal was his 134th in the regular season to tie Jeff Cunningham for third most in MLS history.

Waterman capped the comeback with a shot from the left side that snuck past goalkeeper Eloy Room, who was moments away from his third straight shutout before Kamara’s tally.

Inclement weather hounded the Crew for the second game in a row when lightning stopped the match in the 74th minute with Columbus ahead 1-0. Play resumed 1 hour, 28 minutes later.

On Saturday at Charlotte, the Crew endured two delays totaling more than four hours before the match was postponed after the 16th minute. It will pick up from there on Oct. 5.

Zelarayan continued his fine form with his team-best sixth goal of the season. Of the team’s past nine goals, he contributed to eight (two goals, six assists).

Pedro Santos flighted a ball from the left flank to the opposite side where Steven Moreira brought it down then found Zelarayan at the top of the box. Zelarayan’s shot took a deflection off a Montreal player on the way into the net.

CF Montreal goalkeeper Sebastian Breza had no chance on that one but two minutes later made a brilliant reactionary save on Cucho Hernandez.

Hernandez, who had four goals in his first three games after his transfer from English club Watford, nearly made it 2-0 early in the second half but had his strike smack off the right post.

Breza made another excellent save on Hernandez in the 80th minute, denying him at the right post.