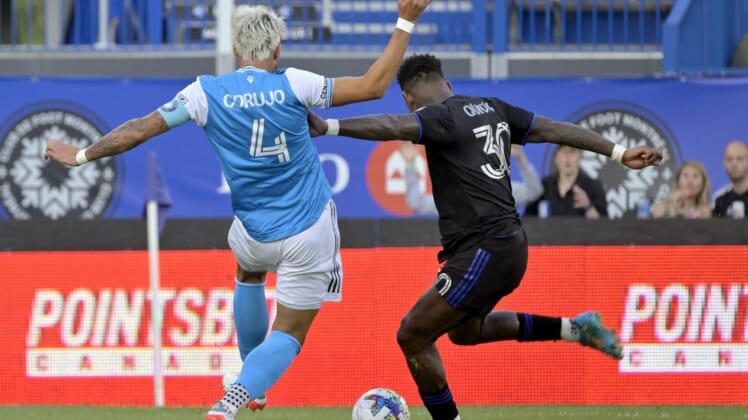 Mathieu Choiniere struck early in the second half to lift CF Montreal to a 2-1 win against the visiting Charlotte FC on Saturday.

The first-year side had 10 players unavailable for the match due to MLS health and safety protocol, including Andre Shinyashiki, Ben Bender, Sergio Ruiz, Yordy Reyna, and starting goalkeeper Kristijan Kahlina.

Romell Quioto opened the scoring for Montreal in the sixth minute.

Zachary Brault-Guillard settled the ball outside the 18-yard-box before sending it up to Quioto inside, where the striker fired from the top right of the goal area into the far side of the net for the 1-0 lead.

Charlotte capitalized on a failed clear by Montreal after a free kick to level the score 1-1 in the ninth minute.

Goalkeeper Sebastian Breza’s diving save pushed the ball forward to Charlotte defender Joseph Mora, who quickly dished off to Anton Walkes on the left side. Walkes’ cross into the box hit Montreal’s Victor Wanyama and redirected to Guzman Corujo at the top of the goal area for the strike.

It was the only shot attempt of the opening half for Charlotte.

Montreal made substitutions to start the second half and it paid off in the 47th minute.

Quioto sent a pass from the defensive side of midfield to Choiniere, who started the match on the sidelines, uncovered along the left wing. Choiniere maintained possession into the box before beating Marks with a shot to the bottom right corner to put the home side ahead 2-1.

The goal was reviewed for offside but stood after video replay.

Charlotte came close to netting the equalizer late in the second.

In the 82nd minute, Quinn McNeill had a near break but was denied by the speed of Brault-Guillard to kick the ball away. Moments later, Karol Swiderski’s chance off a rebound in the goal area sailed over the net.