Celtics land No. 2 seed with wire-to-wire win over Grizzlies 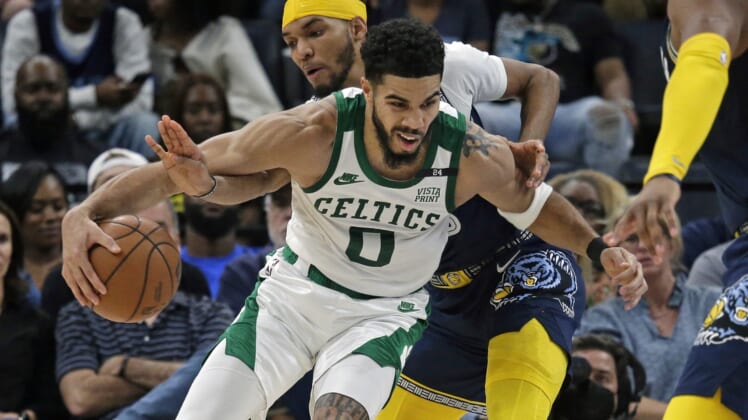 Jayson Tatum scored 26 of his 31 points in the first half in a 139-110 blowout of host Memphis on Sunday that, coupled with Milwaukee’s loss at Cleveland earlier in the day, powered the Boston Celtics to the Eastern Conference’s No. 2 seed.

Boston (51-31) closed out a strong final two-plus months to the 2021-22 regular season with a wire-to-wire win over the Western Conference’s No. 2 seed, albeit a short-handed Grizzlies bunch.

The Celtics took advantage, pushing the first-quarter lead to as many as 10 points. Tatum scored 14 points in the opening period to set the pace, then pumped in another 12 in a second quarter Boston won 40-24.

The visitors went into intermission with a 23-point lead and inflated it to as many as 33 in the second half.

Jaylen Brown scored 18 points for Boston, Al Horford added 13 and Daniel Theis recorded a double-double of 11 points and 10 rebounds. Payton Pritchard and Luke Kornet chipped in 12 and 10 points off the bench.

Sunday’s win put an exclamation point on a remarkable midseason turnaround for the Celtics. After falling a game below .500 on Jan. 21, Boston finished 28-7 to vault into the East’s second spot.

As a result, the Celtics will face the winner of Tuesday’s play-in matchup between Brooklyn and Cleveland. Cleveland’s 133-115 win over Milwaukee on Sunday opened the door for Boston to clinch the No. 2 seed.

Santi Aldama led Memphis with a career-high 20 points off the bench and grabbed 10 rebounds to match a career-high in a double-double. Williams scored 18, and Konchar recorded a triple-double of 17 points, 13 rebounds and 10 assists.

The Grizzlies will face Tuesday’s play-in winner between Minnesota and the Los Angeles Clippers in the first round.