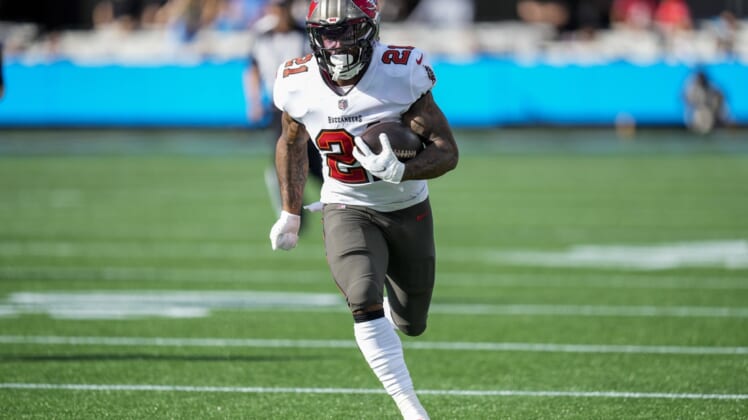 It’s Week 17 in the NFL regular season, and it’s time once again to scan the board to find our favorite touchdown scorer props for the weekend.

There are some advantageous matchups worth a look, and here are seven scorers I like for Sunday’s slate.

Ke’Shawn Vaughn: +270 on FanDuel
We have just two more weeks to continue betting running back touchdowns against the New York Jets, who allow a league-high average of 1.74 touchdowns per game to the running back position.

This week, it’s the Buccaneers’ Vaughn who offers the best value. Ronald Jones is the starter, but his odds are closer to -150.

Vaughn played 36percent of the snaps in the first game since Leonard Fournette’s injury and scored a long touchdown.

He should continue seeing carries, and at these odds, I think this is strong value.

Trey Lance: +125 on PointsBet
Lance is expected to make the start this weekend with Jimmy Garoppolo doubtful. Lance gets himself a great opponent to work against in the lowly Houston Texans.

Houston allows the second-most rushing touchdowns per game, and Lance brings a mobility that the Niners are likely to utilize.

In Lance’s one start this year, he had a rushing touchdown, so let’s go ahead and load up a repeat performance.

A 49ers running back is another fine option here, and Elijah Mitchell (knee) is expected to play.

Rashaad Penny: +130 on DraftKings
I’m surprised we’re getting this at plus-odds, and it’s a great bet to take on its own or include in a touchdown parlay.

In the four consecutive games in which Rashaad Penny has received double-digit carries, he has scored three times.

Detroit has been another defense we’ve targeted all year due to their generosity towards running back scoring (1.53 TDs allowed per game).

Penny is the top back in Seattle and should see his chances to find the end zone. I love these odds.

John Bates: +650 on BetMGM
If you don’t recognize this name, it’s understandable. Bates is a tight end for Washington and has quietly been the Football Team’s top TE for the past seven weeks.

Bates is playing roughly 75 percent of the snaps and seeing a few targets each game. This weekend he’ll get Philadelphia, which has been extremely vulnerable to TE touchdowns.

The Eagles are tied with the most touchdowns allowed to the position at 11, and four of the past five weeks a tight end has scored against the Eagles.

Kenny Golladay: +300 on DraftKings
I’ll admit, this one is ugly, but hear me out! Golladay has failed to score a touchdown all season, so there isn’t a performance trend to back this pick up.

However, Golladay is the last man standing in New York. Kadarius Toney is out. Sterling Shepard is out. Darius Slayton is out. Collin Johnson is out. John Ross is out.

There’s no one else!

The Giants play the Bears this weekend, who allow the second-most touchdowns per game to wide receivers. If ever there was an opportunity to find the end zone, it’s this week.

Hunter Renfrow: +190 on FanDuel
Renfrow has one of the steadiest roles on this Las Vegas offense. While his playing time tends to cap out at around 60 percent of the snaps, he has received red-zone targets in three straight weeks, and leads the team’s pass-catchers in looks near the goal line.

This is a must-win game for the Raiders and their playoff hopes, and the Colts allow the third-most touchdowns per game to receivers.

Michael Gallup: +210 on FanDuel
I admit that I’ve included Gallup in this column a lot recently, and he has failed to score in three straight weeks.

With that established, I’m keeping the faith that this man offers strong value to score for Dallas this weekend.

For starters, the Cowboys play the reeling Cardinals, who allow the most touchdowns to wide receivers.

Gallup had two red-zone targets last week and is seeing the field a lot for this offense. He brings the best odds among the three receivers, so I’m giving him another chance.

It helps that this game is the highest over/under of the weekend. We should see plenty of scores.

That’ll do it for this week’s top touchdown picks! Let’s have ourselves a profitable Week 17.