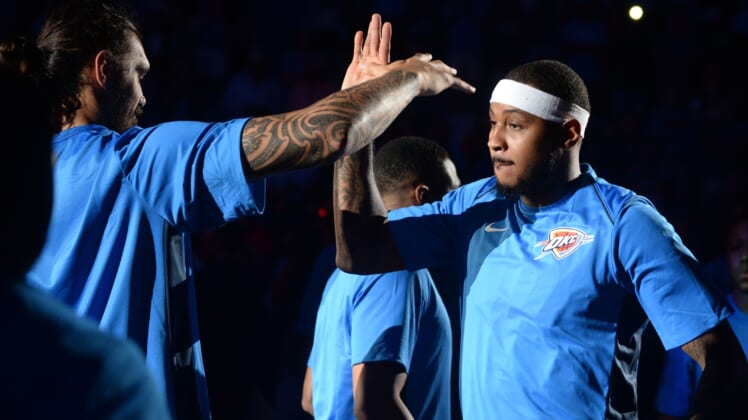 Carmelo Anthony is a terrific shooter, but the ugly truth is teams have never succeeded with him as the ball-dominant player. The veteran is starting to recognize his best fit, the Oklahoma City Thunder are surging and Carmelo is enjoying himself.

According to Royce Young of ESPN, Anthony said the accepted the role in December as the No. 3 scorer behind Russell Westbrook and Paul George is helping him have fun on the court.

“The game is starting to become fun again for me, fun for us as a team. Any time you get to making shots and winning basketball games, it makes it that much more fun.”

For anyone who’s watched Carmelo at the Olympics in the past, his success as a catch-and-shoot weapon is no surprise.

Anthony has helped Team USA win three straight gold medals. In 2012, he set a record with 10 three-pointers in one game and connected on 50 percent of his long-range attempts. Melo buried 40 percent from beyond the arc in 2016.

The Thunder are starting to see a little bit of “Olympic Melo.”

Over the first two months of this season, 39.2 percent of Anthony’s attempts were considered catch-and-shoot, per NBA.com. He hoisted 47.9 percent of his shots with a defender 0-4 feet away, which was a major contributor to a 50.9 effective field-goal percentage. OKC was 14-15 during that time.

In the last 30 days, however, Anthony has logged 43.0 percent of his attempts as catch-and-shoot. Defenders are within four feet 40.8 percent of the time, and his eFG% has climbed to 54.8. The Thunder are 11-5 in that span.

Anthony accepting his place as the No. 3 scorer is a major boost for OKC.