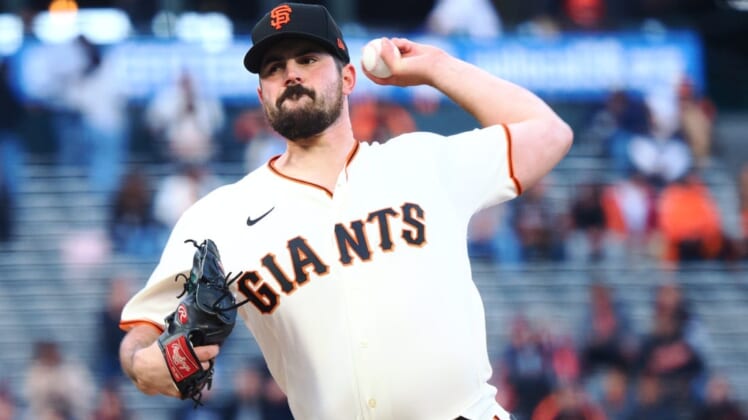 The San Francisco Giants have had a rougher time in 2022 than during their 107-win season of a year ago. But the defending National League West champions are still hopeful of rediscovering their dominating ways as they visit the Cincinnati Reds on Friday night in the opener of a three-game weekend series.

The Giants have won their last two after ending a five-game losing streak with a dramatic 13-12 win on Tuesday over the New York Mets. San Francisco’s visit to Cincinnati opens a 10-game road trip that will continue with three games in Philadelphia and four in Miami.

Joc Pederson was the hero Tuesday with three home runs while Evan Longoria homered in the first two innings Wednesday as the Giants won the series. Pederson and Mike Yastrzemski also homered as the Giants showed the form of their record-setting 2021 season.

“One of the reasons we were successful last year is because our veteran players had signature and sort of career years,” Giants manager Gabe Kapler said. “(Longoria) was excellent when he was on the field for us. In order for us to get where we want to go, it’s going to have to be (Brandon) Crawford and (Brandon) Belt and Longo and Joc and some of these veteran players carrying us.”

The Reds managed to split their four-game series with the Cubs on Thursday and will continue their seven-game homestand with the series against the Giants.

The Giants send left-hander Carlos Rodon (4-3, 3.43) to the mound in the series opener. After winning his first three decisions of the season, Rodon has struggled in the month of May. He is 1-3 with a 5.82 ERA in his last four starts.

But those numbers are skewed by his start on May 15 at St. Louis, in which he was tagged for eight runs and 10 hits in just 3 2/3 innings of a 15-6 loss to the Cardinals. He delivered quality starts of six innings and just two runs allowed in each of his three other outings this month, but still took the loss in two of the three.

He rebounded well in his last start, allowing two runs on five hits in a 2-1 home loss to San Diego.

The Reds could be the perfect remedy for Rodon, as he is 2-0 with a 1.64 ERA in his two previous career starts, allowing just two runs and five hits in 11 innings.

The Reds, coming off their first 20-run game since Sept. 4, 1999, have not announced a starting pitcher for their first two games of the Giants series.

Cincinnati’s top position prospect, Jose Barrero, has been taken off the 60-day injury list as the team monitors a return to the majors they hope will take place in early June. The shortstop, who had left wrist surgery, began a rehab assignment with Triple-A Louisville on May 20. He has slashed .294/.333/.529 with a double and a home run over his first five games.

“He’s going to stay there to play. More to just to try to recreate a spring training for him,” Reds manager David Bell said Thursday. “He could come back and play at any point, but we’re not going to rush that if we can help it.

“He is not on the 60-day IL, so he can come back and play. The plan is to let him play, get his at-bats, get his timing and all that.”