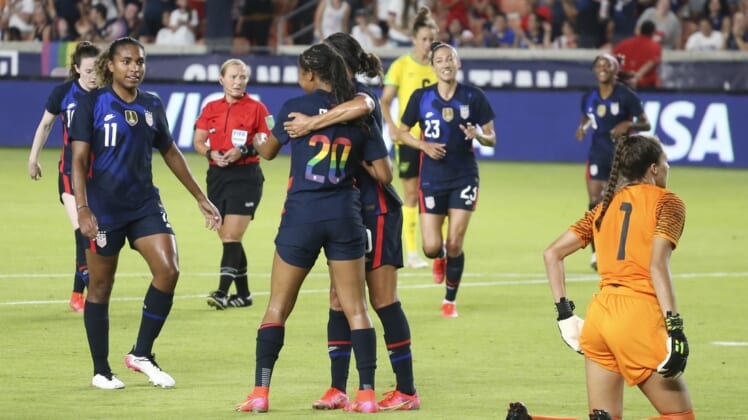 Carli Lloyd became the oldest player to score for the U.S. women’s national team as part of a 4-0 win against Jamaica in Houston on Sunday.

Lloyd made it 1-0 just 24 seconds into the friendly at BBVA Stadium and Lindsey Horan added a penalty in the 7th minute as the world’s top-ranked team easily extended its unbeaten streak to 41 matches (37 wins, four ties), the third-longest in team history.

Midge Purce extended the lead in the 22nd minute, Alex Morgan scored in the 91st minute and U.S. backup goalkeeper Adrianna Franch did not need to make a save. Jamaica’s Sydney Schneider stopped five shots.

Lloyd, who did not start when the U.S. struggled to a 1-0 win vs. Portugal on Wednesday, took a service from Rose Lavelle off her thigh, brought the ball down and scored her 125th goal in 303 matches. At 38 years, 332 days she bettered the record held by Kristine Lilly (38 years, 264 days).

After Lloyd came close to scoring in the third and fifth minutes, Christen Press was fouled by Konya Plummer and Horan calmly stepped to the spot and deposited her 21st career goal.

Purce followed in the 22nd minute against the lax defending that allowed her time and space to settle a pass from Press and score her second goal to the near post as the U.S. overwhelmed the No. 51 Jamaicans.

Morgan had an unmarked header from 6 yards for her 110th goal in the waning seconds.

The U.S. will play Nigeria on Wednesday to christen Q2 Stadium in Austin, Texas, as coach Vlatko Andonovski looks to set his 18-player roster before the Tokyo Olympics tournament in late July.