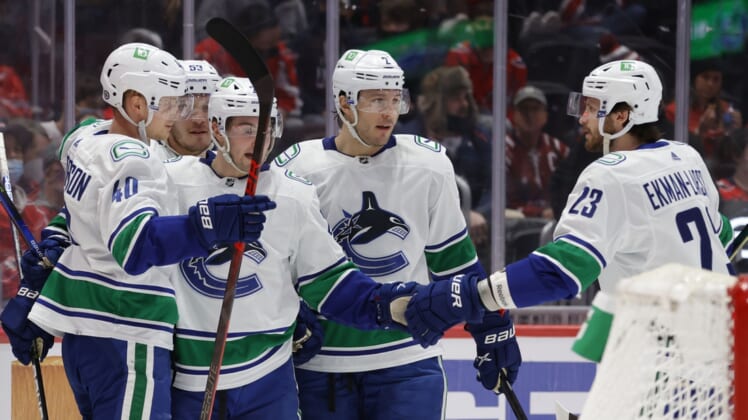 In their latest game, the Vancouver Canucks received a jolt from both Elias Pettersson and their sputtering power play in order to snap a three-game losing streak.

The Canucks would love for both Pettersson and the power play to make their mark again Tuesday when the team concludes its five-game road trip with a matchup against the Nashville Predators.

Pettersson snapped a seven-game goal drought by scoring twice early in the second period of Vancouver’s 4-2 victory over the Washington Capitals on Sunday. The former Calder Memorial Trophy recipient (rookie of the year) also netted one of the two power-play goals for the Canucks, who were 0-for-12 with the man advantage during the first three games of the road trip — all losses.

“Sometimes, it just doesn’t go your way,” Pettersson said. “I know what I’m capable of. It’s been tough for me and a slow start. We just have to stay the course as a team and not get down, and we came into this game with the right mindset.”

Vancouver coach Bruce Boudreau added, “Everybody did their job, and when the power play is working, you’re going to have some success. And whether they went in off (Pettersson’s) head or a great shot, it didn’t matter. He got two and we don’t have a lot of natural scorers. Hopefully, it’s not a one-off or an anomaly, and he can continue to do this.”

Captain Bo Horvat also scored with the man advantage to boost his team-leading goal total to 13. Horvat, who has scored in back-to-back games overall, had an assist in Vancouver’s 3-2 home setback against Nashville on Nov. 5.

J.T. Miller, who also had an assist in the first meeting with the Predators, has recorded 19 points (five goals, 14 assists) in his past 16 games. He leads the Canucks with 38 points.

Vancouver defenseman Quinn Hughes has logged 15 of his team-leading 28 assists in his past 16 games.

Nashville has followed up a scintillating 12-1-1 stretch with three straight losses (0-2-1). The Predators will open a three-game homestand on Tuesday, one day after dropping a 5-3 decision to the St. Louis Blues.

“There’s always stuff to learn from every game we play,” Nashville forward Colton Sissons said Monday. “Honestly, I’m looking forward to getting right back at it. There’s nothing better than playing the next night after a loss to right that wrong. We have to find a way to get two points (Tuesday).”

Ryan Johansen opened the scoring Monday and Filip Forsberg added his team-leading 19th goal in his return from a four-game absence while in COVID-19 protocol.

Josi scored a goal in Nashville’s previous encounter with the Canucks.

The Predators workhorse goaltender, Juuse Saros, owns a 2-0-0 record with a 2.43 goals-against average and .900 save percentage in five career meetings (two starts) with Vancouver.

Saros made 26 saves to pick up the win in previous encounter opposite Thatcher Demko, who turned aside 25 shots in that game. Demko fell to 1-1-0 with a 3.06 GAA and a .908 save percentage in two career meetings with Nashville.