Canes have scoring groove back with Habs up next 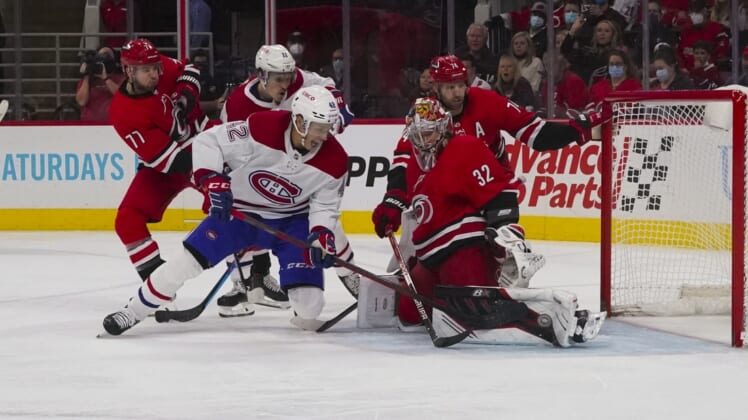 By the time the Carolina Hurricanes returned home this week, some concerns about the dried-up goal scoring should have been alleviated.

They rediscovered their scoring touch and now look to carry that into the next game when the Montreal Canadiens visit Thursday night at Raleigh, N.C.

The Hurricanes came off a three-game road trip that produced five points. They scored 16 goals across those three games.

On the flip side, Montreal has won just twice in its last eight games (2-3-3).

The Hurricanes’ trip also left them with forward Jesperi Kotkaniemi out of the lineup because of an injury with an unclear determination of how long he might be sidelined.

Maybe the Hurricanes will receive a boost from rookie forward Seth Jarvis. He has produced two-point games in three of his last six outings after a February scoring slump.

“Now that I’m in this position, I have to take full advantage,” Jarvis said.

Carolina’s road swing ended with Tuesday night’s 4-3 overtime loss at Tampa Bay just one night after winning at Washington. This stretch has taken a toll on the Hurricanes.

“The guys tried their hardest, but we were slow on everything,” Hurricanes coach Rod Brind’Amour said. “Everything you’re doing is slow. You’re just losing all the puck battles. … The schedule caught up to us a little bit. Every team has that. We still had a chance to win the game.”

Hurricanes center Sebastian Aho reached the 30-goal mark for the season. He has scored a goal in three of his last five games.

It might be more difficult for the Canadiens to find much optimism.

“Stay positive in the dressing room,” said Montreal defenseman Joel Edmundson, who two seasons ago played for the Hurricanes.

Montreal lost 7-4 on Tuesday night at Florida, so if the defense doesn’t get sorted out and the Hurricanes maintain their uptick offensively, that could be problematic for the Canadiens.

“We’ve got to find a way to get pucks out,” Edmundson said. “Every play matters. … Just got to bear down and win your battles.”

Sometimes it has been difficult for the Canadiens to alter momentum when it’s going in the right direction.

“We were having a hard time getting the puck out in possession to get our offense going,” Canadiens interim coach Martin St. Louis said. “On the bench, we’re pushing each other to get better.”

Carolina has outscored Montreal by a combined 8-1 in two meetings this season, including 4-0 in the Canadiens’ last visit to Raleigh on Dec. 30.

Thursday’s game will mark the third stop on Montreal’s four-game road trip. This comes between the loss at Florida and Saturday’s visit to Tampa Bay.

“It’s a tough road trip. Three of the best teams in the whole league,” Edmundson said. “There’s no better challenge out there.”