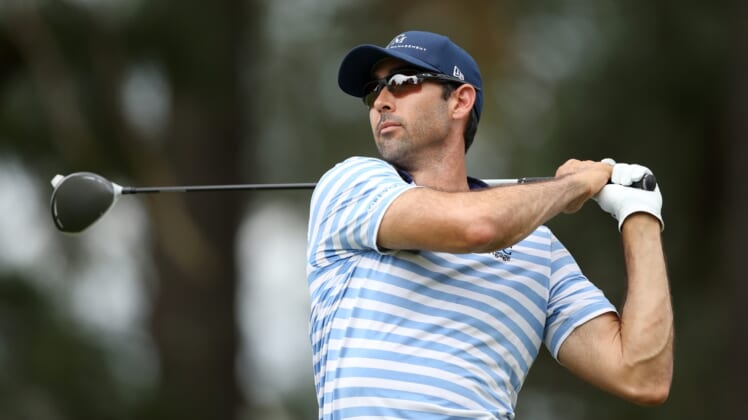 Oct 2, 2021; Jackson, Mississippi, USA; Cameron Tringale hits his tee shot on the 18th hole during the third round of the Sanderson Farms Championship at the Country Club of Jackson. Mandatory Credit: Chuck Cook-USA TODAY Sports

A day after Will Zalatoris tied a course record with an 11-under-par 61, Cameron Tringale nearly matched him, firing a 10-under 62 Saturday to surge into a second-place tie after three rounds of the Sanderson Farms Championship in Jackson, Miss.

Five players are within a stroke of the lead, including leader Sahith Theegala, who has led or co-led since his opening round 64.

Zalatoris is tied for 16th after shooting an even-par 72.

Tringale’s big day included two eagles, on holes 5 and 14, and an additional six birdies with no bogeys.

With no PGA Tour victories at the age of 34, Tringale being within striking distance going into Sunday is significant.

“I love playing,” Tringale said. “Obviously I’ve been out here a long time; I haven’t won, but I love competing and I just want to see if I can keep beating guys and you know you compete every day.

“Sunday they give the trophies away, but you’re really out there grinding and you’re playing against yourself, but it’s just fun to see how I can match up when I’m playing well and even when I’m not, just how to manage that and get the most out of each week. That’s kind of the fun part for me.

“I’m kind of a journeyman to this point and I’m enjoying the journey.”

Theegala is also seeking his first career win. This is his first time leading a tournament after 54 holes, and the 23-year-old is enjoying the ride, rallying for par on his final three holes despite inconsistent driving.

“I started off playing really well, really solid, just missed a few makeable putts, but felt like my game was good,” Theegala said. “Then I started to hit some — I got a few to go in at the start of the back nine — and them I hit some wild drives, I mean way right, so was really happy to escape with a couple pars. It just felt like a grind those last five, six holes there. Obviously really happy with how I ground that out.”

Theegala finished with five birdies and a 5-under 67, to match his second day score.

Denny McCarthy and Sam Burns fired matching 7-under 65s to rise into a second-place tie with Tringale and Cameron Young, who maintained his position with a 5-under 67.

Seth Reeves shot a 63, while Trey Mullinax recorded a 64 to get to 16 under, two strokes behind the leader. Aaron Wise and Canada’s Roger Sloan are each at 15 under, tied for eighth at three strokes back.

Andy Ogletree, the 2019 U.S. Amateur champion playing his first tournament since returning from a five-month absence caused by hip surgery, fell off the pace with a 5-over 77 to enter the final day tied for 66th.