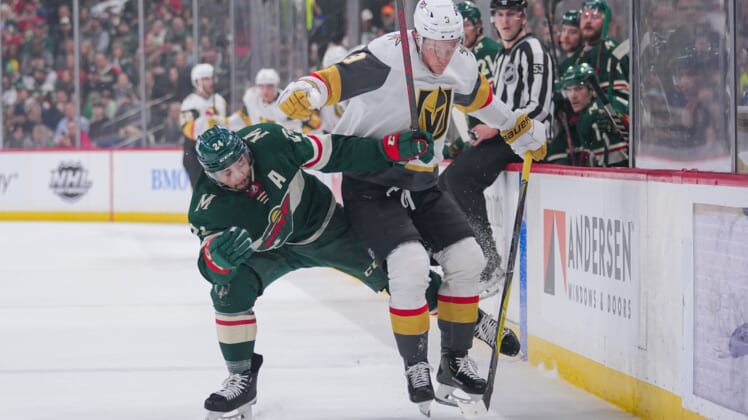 Cam Talbot made 28 saves for his second shutout of the season as the Minnesota Wild won their third straight game, 3-0, over the Vegas Golden Knights on Monday night in Saint Paul, Minn.

Matt Dumba, Ryan Hartman and Nicolas Deslauriers, playing his first game with the Wild after being acquired in a trade with Anaheim on Saturday, scored goals for Minnesota, which leapfrogged idle St. Louis and moved into second place in the Central Division with the win.

It was the 26th career shutout for Talbot, who also has won his last six starts in a row. Minnesota improved to 5-1-1 over its last seven games and is now 20-7-1 at home this season.

Rookie Logan Thompson made 33 saves for Vegas, which had a two-game win streak snapped. The Golden Knights, who play at Winnipeg on Tuesday in the second game of a back-to-back, have lost their last six road games.

Minnesota took a 1-0 lead at the 5:43 mark of the first period when Deslauriers one-timed a Brandon Duhaime pass from the slot through Thompson’s pads for his sixth goal of the season.

Dumba made it 2-0 early in the third period when he intercepted a Dylan Coghlan pass in the Vegas zone and then cut over into the high slot, where he fired a wrist shot past a Marcus Foligno screen and Thompson’s glove side for his fifth goal of the season.

Thompson was pulled for an extra attacker with 2:45 to go and Vegas got three good shots on goal, including a point-blank one-timer by William Karlsson that Talbot turned away. Hartman then sealed the win with an empty-netter with 6.1 seconds left, his 26th goal of the season.

Vegas played without three players who started in their 5-1 victory over Los Angeles on Saturday. Right winger Evgenii Dadonov was dealt to Anaheim right at the trade deadline on Monday afternoon while center Michael Amadio and defenseman Zach Whitecloud both entered the COVID-19 protocol along with assistant coach Ryan McGill.