Clay Helton has been on and off the hot seat during his first six seasons as head coach at Southern California, but he’s managed to keep his job.

But after the No. 14 Trojans lost 42-28 to Stanford at home on Saturday, the calls for his firing erupted on social media, including from a former USC star.

“I’m so pissed , I can no longer FIGHT ON for Him ….. Period embarrassing,” wrote Keyshawn Johnson, who played two seasons at wide receiver at USC before the New York Jets took him No. 1 overall in the 1996 NFL Draft.

Johnson once was one of Helton’s fiercest supporters, calling for his promotion from assistant coach before his hiring.

Matt Leinart, USC’s quarterback a decade after Johnson’s era, was in Columbus, Ohio, working for FOX Sports and watched No. 12 Oregon drop No. 3 Ohio State. He tweeted his criticism of the Trojans early Sunday.

“This is just bad. I saw Oregon today up close and personal and they would drop the hammer on SC,” Leinart wrote about the two Pac-12 foes. “Two programs going in different directions.”

Fans at the Los Angeles Memorial Coliseum seemed to echo the sentiments of Johnson. Boos rained from the crowd throughout the game, and fans even booed the 49-year-old Helton during his halftime television interview.

And the longtime Helton critics piled on via social media, too.

“Sometimes a really ugly home loss is just what a program needs, if you know what I mean,” tweeted national media personality Colin Cowherd. “In fact a couple more hopefully does the trick.#USC.” 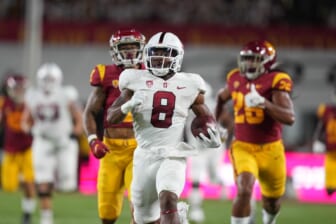