Calgary Flames remain in playoff hunt with win over Senators 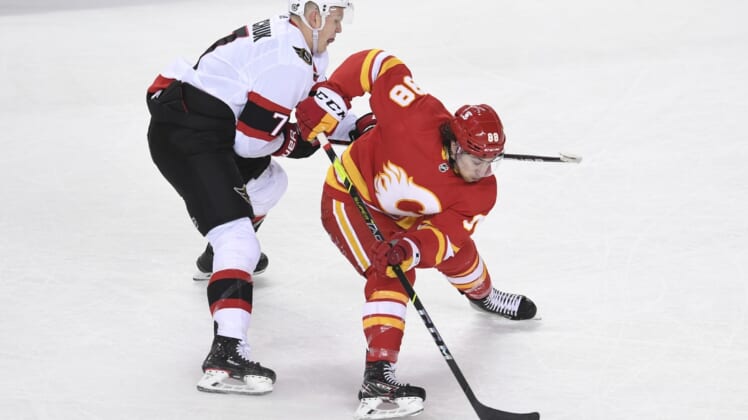 Johnny Gaudreau and Matthew Tkachuk both collected one goal and two assists and the Calgary Flames kept their slim playoff hopes alive with a 6-1 home victory over the Ottawa Senators on Sunday.

The Flames (23-26-3, 49 points) must win their final four games of the regular season and need the Montreal Canadiens to lose in regulation both of their final outings.

Calgary ends the season with four games against the last-place Vancouver Canucks, while the Canadiens twice play host to the Edmonton Oilers.

Josh Norris replied with the lone goal for the Senators (22-28-5, 49 points), who have long been eliminated from playoff contention. Starting goalie Anton Forsberg was victimized for four goals on 23 shots before being pulled in favor of Filip Gustavsson — who stopped 11 shots in relief.

Ottawa, which has long been eliminated, finishes the season with Wednesday’s home game against the Toronto Maple Leafs.

Gaudreau’s breakaway tally just past the midway point of the first period gave Calgary a much-needed boost. While holding off Victor Mete, he deposited a backhand shot for his 19th goal of the season.

Backlund snapped an 11-game goal drought 17 seconds into the second period. Shortly after he was denied on a golden chance, Backlund buried a sharp-angled shot for his ninth tally of the season.

Tkachuk from the doorstep converted Gaudreau’s pass to make it 3-0 at 4:38 of the middle frame. His 11th goal of the campaign ended a 13-game goal slump.

After Stone extended the lead at 10:55 of the period with a bullet of a slap shot — a goal that saw rookie Glenn Gawdin receive an assist and earn his first point — Norris, who is third in rookie scoring this season, put the Senators on the board 61 seconds later with his 16th goal of the season.

Dube restored the four-goal edge in the middle of the third period when he wired a one-timer on the two-on-one rush for his 10th goal of the season and Giordano rounded out the scoring with a late power-play goal.