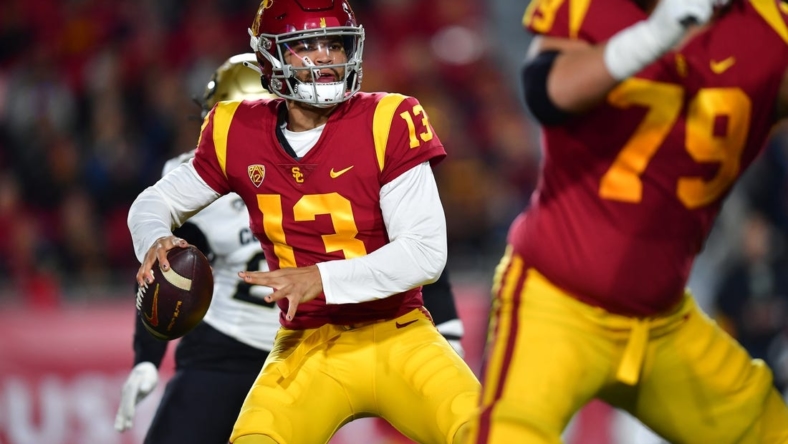 USC’s offense — which began the night averaging 41 points per game and more than 10 points in opening quarters — was shut out in the first period on Friday.

Colorado (1-9, 1-6) led 3-2 going into the second quarter thanks to a 28-yard field goal by Cole Becker, the culmination of a 12-play, 72-yard drive that included a fourth-down conversion and a 37-yard Alex Fontenot run.

USC then seized control in the second quarter.

Williams rushed for a pair of touchdowns in the period, both on cleverly executed run-pass option keepers, and hooked up with former Buffaloes player Brenden Rice on a 32-yard scoring pass. The Trojans deluged Colorado with 24 points in the quarter to put the game away by halftime.

The period was not all good for USC, however. Running back Travis Dye — second in the Pac-12 in rushing heading into Week 11 — was carted off the field minutes before halftime with an apparent leg injury. He returned to the sidelines on crutches in the third quarter.

Filling in for Dye, Austin Jones rushed for 74 yards on 11 carries and scored a third-quarter touchdown on a 12-yard pass from Williams.

Jones’ score put an exclamation point on the win after Tahj Washington quashed any hope of Colorado comeback. The Buffaloes showed some life, pulling to within 26-10 on Fontenot’s 3-yard touchdown run shortly after halftime, but Washington broke a 61-yard scoring reception less than a minute later to slam the door.