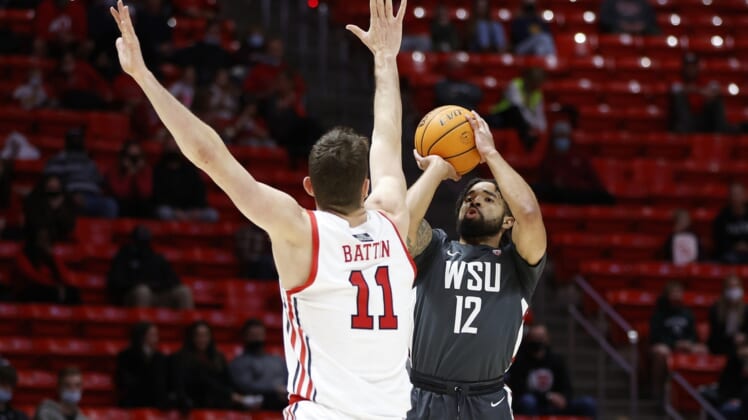 California and Washington State will look to finish what they start Saturday afternoon, unlike their most recent Pac-12 Conference outings, when they allowed leads to disappear late.

On Thursday, the Cougars appeared on their way to a home win over Stanford, leading 35-26 at halftime. But the Cardinal dominated the second half and won 62-57, denying Washington State an opportunity to score back-to-back conference wins after a 77-61 surprise at Utah last Saturday.

Mouhamed Gueye recorded a 16-point, 11-rebound double-double for the Cougars against Stanford, while Michael Flowers continued his impressive season with 12 points.

A graduate transfer from South Alabama, Flowers has put up at least seven points in all 16 Washington State games. He’s scored in double figures 11 times.

But Flowers is more than just a scorer, coach Kyle Smith noted this week.

“I didn’t expect this,” Smith said of Flowers’ all-around game. “He’s really become a better defender. He’s taken on the job of being our top passer. He’s good in the pick-and-roll. If he can keep doing that, giving up some of his game for others, that’s going to make us the best we can be.”

Cal has lost three in a row, including 64-55 at Washington on Wednesday — a game in which the Golden Bears led 51-47 with 8:32 to go before failing to make another basket until just 16 seconds remained.

The Huskies took control with a 15-0 flurry.

“We just got worn out again at the free-throw line,” Cal coach Mark Fox lamented of the Huskies’ 16-3 scoring advantage at the line. “That’s disappointing.”

Cal was playing without starting point guard Joel Brown, who was sick and did not make the trip to the Northwest.

It’s the first time this season the Bears have lost three in a row, and the skid comes on the heels of a five-game winning streak.

Washington State swept last year’s season series with Cal in relatively comfortable fashion, 71-60 on the road in January and 82-51 at home in February.