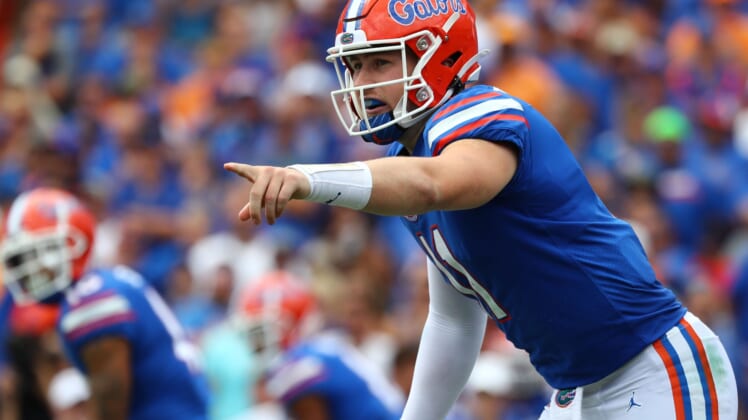 Even on a weekend without the Clemson Tigers and Alabama Crimson Tide, Week 6 of the college football season is shaping up to be entertaining for football fans.

We’ll be treated to an early top-10 matchup between No. 7 Auburn and No. 10 Florida with conference and College Football Playoff implications on the line. The action between ranked teams won’t stop there. No. 4 Ohio State faces its toughest test this season against No. 25 Michigan State, and No. 19 Michigan faces No. 14 Iowa. Of course, it’s only part of this week’s thrilling action.

It’s a week where everything will be on the line, and the individual matchups and performances will define the rest of the 2019 seasons for these teams. Now let’s take a look at the burning questions that will decide Week 6’s biggest games.

Can Cincinnati’s offense hang with No. 18 UCF?

The Knights have dominated the American Athletic Conference for the past two years. Now the Bearcats find themselves in position to potentially end UCF’s reign at the top. It will all come down to Cincinnati’s offense in a potential high-scoring battle.

UCF freshman quarterback Dillon Gabriel is a star on the rise and receiver Gabriel Davis is his go-to weapon in the passing attack. The Bearcats need Desmond Ridder to be more consistent on Friday and make some big throws to complement a steady running game that eats up clock. If Cincinnati can put up points early and establish the run, UCF’s conference supremacy will end.

The Wolverines’ offense looked pedestrian even before its key role in a humiliating loss to Wisconsin. We saw signs of life and consistency in Week 5, but are Michigan’s woes solved or did it simply take advantage of one of the worst teams in the country?

Iowa struggles to put pressure on quarterbacks with just six sacks this season. That gives quarterback Shea Patterson plenty of time to attack the Hawkeyes’ secondary, but they will punish him if he makes any mistakes. If Michigan eliminates the mistakes that haunted it to begin the season, it will pick up a needed win. If its offense returns to its old form, Iowa will roll and Harbaugh’s seat will get hotter.

Florida’s fans are certainly feeling optimistic about Trask after he delivered a clutch comeback against Kentucky then won his next two games as the starter. Confidence is fantastic, but facing Auburn is a whole different beast than Tennessee and Towson.

The Tigers can dominate at the line of scrimmage and will focus on taking away Florida’s rushing attack. It will put this game squarely on Trask’s shoulders. A single turnover is all Auburn will need in a low-scoring game to win. Trask must be extremely efficient and eliminate costly mistakes for the Gators to win.

Is Baylor a legitimate conference contender?

The Bears are finding their way back to relevance under head coach Matt Rhule. Now Baylor gets to test its legitimacy on the road against Kansas State. It won’t be an easy test against the 3-1 Jayhawks, who will be looking to rebound after a crushing loss to Oklahoma State.

Kansas State enters as a slight favorite, but Rhule’s offense offers the potential to sneak out with a victory. If quarterback Charlie Brewer can build off his excellent play in the win over Iowa State, Baylor will be 5-0 and back in the top-25 rankings.

Fields is exceeding every wild expectation Ohio State’s fan base held for him before the season. Now we get to see if Michigan State’s defense, one of the best defenses in the country, can stop him and Ohio State’s two-headed attack.

The Spartans enter Week 6 allowing under 200 passing yards per game to opponents with as many touchdowns allowed as interceptions (six). Of course, Arizona State’s freshman quarterback Jayden Daniels is the best they faced all year. Michigan State will have its hands full with running back J.K. Dobbins, but Fields’ performance will either make this game a blowout or give the Spartans a chance to win.