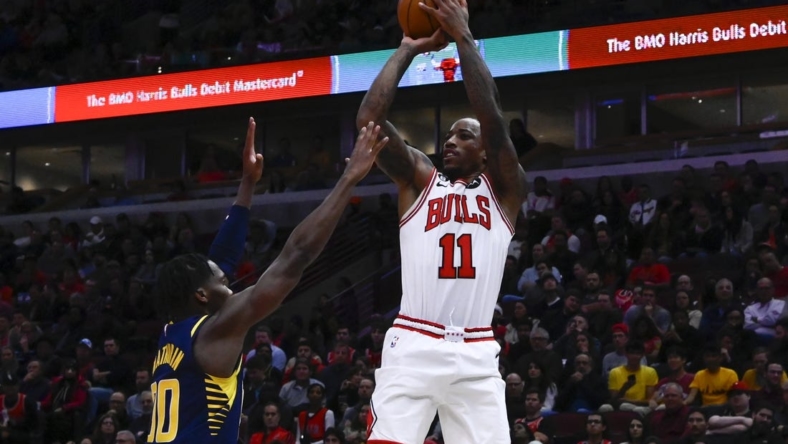 DeMar DeRozan will be chasing a milestone in a familiar neighborhood when his Chicago Bulls visit the young and feisty San Antonio Spurs on Friday.

Both teams have won three of their five games this season, with the host Bulls coming off a 124-109 win against Indiana on Wednesday and San Antonio returning home after a 134-122 loss in Minnesota on the same day.

DeRozan had 17 points in Wednesday’s win and drew to within seven points of becoming the 54th player in NBA/ABA history to reach the career 20,000-point plateau. He will likely reach that mark in San Antonio, where he was the go-to player for the Spurs for three seasons ending in 2021.

Only six active players have reached the milestone.

“Going back to a place that I spent some time, learned so much from, a place that embraced me, wasn’t nothing but love. … I think it’ll be cool to be able to do it there,” DeRozan said. “It was definitely a learning curve for me in my career at a critical time — and (San Antonio coach Gregg Popovich) really helped me a lot in my career.

The Bulls got 28 points from Zach LaVine in beating the Pacers. Chicago forged a 24-point lead in the second quarter before Indiana fought back to within 95-91 late in the third.

“Offensively, we’re going to be fine,” LaVine said. “We’re going to find our way because we have so many top offensive players. Even if it’s not going well, one of us will be able to get charged up.”

The Spurs won the first three games of their road trip before falling to the Timberwolves on Wednesday.

The Spurs led briefly in the opening minutes but fell behind 68-53 by halftime. They scored 41 points in a wild third quarter to pull within eight heading into the fourth. Then a late run in the fourth by the Timberwolves finished off short-handed San Antonio.

“We never count ourselves out of any game,” Spurs guard Tre Jones said. “We know that it’s a long game. We’re a young team, and there’s a lot of games left to be played.”

San Antonio played without guards Devin Vassell and Joshua Primo, who were out with knee and glute injuries, respectively. Both are expected to be a game-time decision to play against Chicago.

“I’m proud at how everybody competed,” Richardson said. “The Timberwolves are a tough matchup for any team. Coming in here short is not easy. We competed for 48 minutes.”