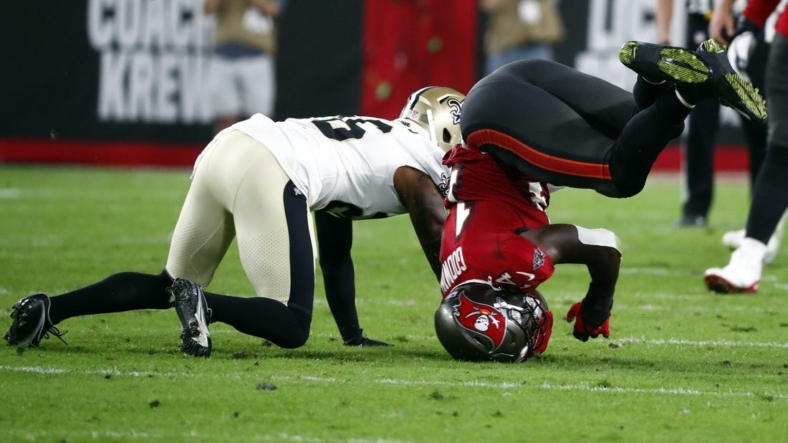 Neither player participated in practice this week after sustaining their respective injuries in Tampa Bay’s 19-3 victory over the Dallas Cowboys on Sunday.

Godwin, who injured his hamstring versus the Cowboys, was playing in his first game since tearing his ACL in the Buccaneers’ 9-0 loss to the Saints on Dec. 19.

“He’s in play by a small margin but we’ll see on Sunday,” Bowles said of Godwin. “If I had to guess, I’d say he wouldn’t.”

Smith hyperextended his right elbow in the second quarter last weekend. Backup tackle Josh Wells likely would get the start should Smith be unable to play.

“Not out — Donovan will be close,” Bowles said. “It will be hard for him to make it, but we’ll see. The rest of the guys we’ll see on Sunday.”

The “rest of the guys” include a number of wide receivers, including Mike Evans (calf) and Julio Jones (knee).

Both Evans and Jones missed Thursday’s practice, however they were spotted warming up prior to Friday’s session. The team had yet to release an official injury report.