Bucks on brink of season sweep vs. rival Bulls 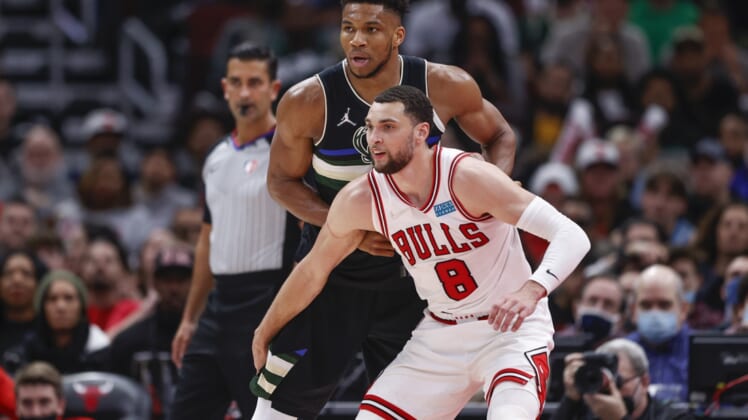 The defending NBA champion Milwaukee Bucks have clinched a playoff spot and still have a shot at the top record in the Eastern Conference, while the rival Chicago Bulls are closing in on their first postseason berth in five seasons.

Of all the variables entering Tuesday night’s Bucks-Bulls clash in Chicago, those items at least are known.

To improve its positioning, however, Chicago must overcome a season-long slump against Milwaukee, which is looking to sweep the four-game season series against its Central Division foe.

Milwaukee won by four and six points, respectively, in the teams’ first two meetings this season before cruising to a 126-98 home win on March 22. The Bucks shot 61 percent from the floor, getting a game-high 27 points from Jrue Holiday and 25 points and 17 rebounds from Giannis Antetokounmpo.

The Bucks are just 3-3 since then, however, and are on a two-game skid that includes Sunday’s 118-112 home loss to the Dallas Mavericks.

While Antetokounmpo paced the Bucks with 28 points and 10 rebounds, he and Khris Middleton (11 points) combined to shoot 15 for 36 from the field, including 0 for 7 from long range. The duo struggled with a varied array of double teams that Antetoukounmpo called “very disciplined.”

“Honestly, I just feel like Khris and Giannis just missed shots,” said Jrue Holiday, who added 20 points for the Bucks. “There was a lot of shots that they usually take and make. Dallas does a good job of packing the paint and making it frustrating. Crowding, double teaming, throwing a lot of different things at them.

“But at the end of the day, that’s something I think they’re pretty much used to. And we’re going to see it here very, very soon. It’s not like it’s something that doesn’t happen or occur very often.”

Also 3-3 since the most recent meeting with Milwaukee, the Bulls hope to shore up their defense after yielding 130 and 127 points, respectively, in splitting the first two games of a five-game homestand.

Chicago needs either one more victory, or a loss by the Cleveland Cavaliers, to secure a top-six seed in the East and avoid falling to the conference play-in tournament.

Zach LaVine, who led the Bulls with 33 points in Saturday’s loss to Miami, just ahead of DeMar DeRozan (26), said the Bulls continue to feel good about their postseason prospects despite falling to 2-19 against the top four teams in the East and West.

“If you don’t have confidence in it, there’s no point in even playing,” LaVine said. “Obviously, our record versus (Miami) is not good, but I’m not going to doubt that. Obviously, you never say you can’t beat anybody. I’m a competitor. I think I can beat anybody. Even if you lose, get back up and swing again.”